KotakuInAction2
Communities Topics Log In Sign Up
Sign In
Hot
All Posts
Settings
Win uses cookies, which are essential for the site to function. We don't want your data, nor do we share it with anyone. I accept.
DEFAULT COMMUNITIES • All General AskWin Funny Technology Animals Sports Gaming DIY Health Positive Privacy
92 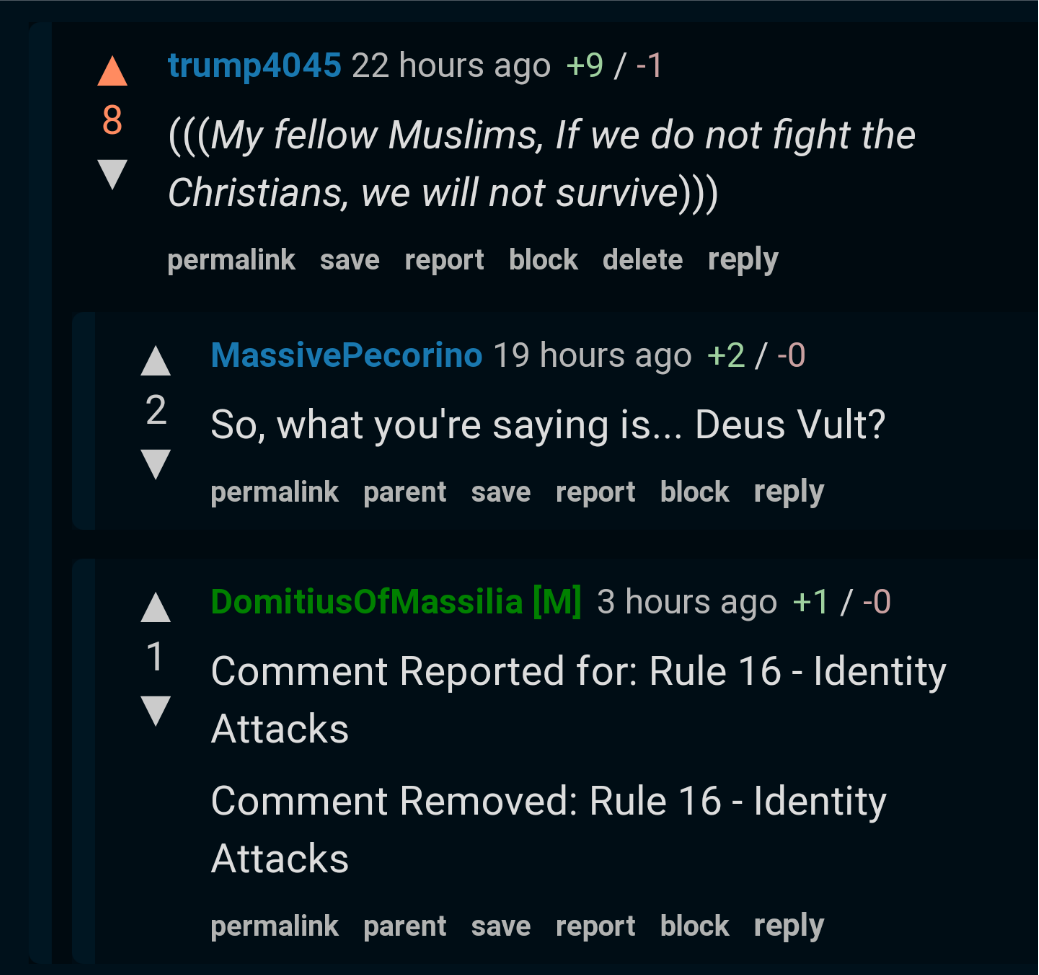 You can literally talk shit on this board about any identity group save one, and then you’ll get banned or suspended for recognizing who holds power over you.

Most people don't like getting their heads cut off.

Most people don't like getting their penises cut off either, but welcome to 2022.

True, but 41% of the time those are a self-correcting problem.

That's not true, you just don't tend to violate the rules in any other direction.

If I see anyone saying the same shit about Christians (and actually being serious about it, not Jester's "Great Irish Conspiracy" stuff), then yeah, it will get removed all the same.

Thing is, you just don't do it to other groups to the same level. Even blacks.

On rare occasion, I have seen comments about Indians. So far, I think I've removed one comment about whites and christians needing to be culled because a troll showed up.

Most of the complaints about 'anti-white' comments are just Jester calling someone an inbred, not a race of people being called inbreds. And if we're talking about inbreeding generally, that's not specific to any group. That's a thing that's happened with whites, jews, muslims, arabs, asians, etc.

Impy is constantly getting banned for s(*t-talking women.

I guess he's right that the More Feminine Way is intent on, like, genociding us all and such as?

Imp also literally spams the site with multiple posts a day + comments. Something I never do. I suspect the only reason he gets suspended is to fake the appearance of neutrality.

This site bans anyone who tells the truth about who runs the banks and who pushed tranny lies onto the children too young to know better.

Who does that? Indians?

Yes, that must be it.

Imp is banned for being Imp.

Now if I were in charge, he would be free to complain away since women, while not the root of our problem, are an unnecessary distraction and he keeps them away.

Women who are with us aren't, and he's not even keeping them away.

Yet I see nigger spammed here all the time

I believe use of the word is allowed, if not referring to anyone. Basically, the old - and possibly current - KiA rule.

I guess he's right that the More Feminine Way is intent on, like, genociding us all and such as?

Of course I am, but that's not why I get banned.

The reason I get banned is because people like OP spam report everything I say in the hope it crosses the line.

I have never reported you. I don't believe in censorship even for shills.

I don't believe that for even half a second.

I suppose that's the question: do the mods pre-emptively delete rule violations or do they wait for reports?

Because if they act only on reports then obviously the loudest complainers are going to get their enemies banned.

It does not matter if they are reported. All reports do is bring it to their attention. No more.

Try it. Let's see if it goes on any identity group then.

EDIT: Try this, make a separate post attacking each identity and we shall see which one gets taken down, ok?

All Jesters are whiny faggots.

ok groomer. Not gonna take the challenge then? Coward.

Congrats in admitting you are one. A retarded coward.

It is the first step into healing. Admission.

I understand now why you won't do it. You are afraid that attacking any other identity here will get you banned, and thus break the narrative. Got it.

You bait people then call the mods in to ban them. You're such a little faggot.

So the narrative they are portraying is not true then. Thanks for confirming.

What do you want to happen then? All because you are violent and can't accept other people's opinion? Control your rage. You are acting like a spoiled pink haired antifa shit who didn't get xer/xir/zir/zer way.

I guess this is why I am better than you will ever be because I don't wish harm to you or anyone else. Nor anything negative happen in your life.

You sound like an antifa. What do you plan on doing to me?

It's funny, someone who acts tough online and couldn't do the challenge I said. Pathetic. A coward.

DomitiusOfMassilia is a reddit style terrible and overbearing mod. Not surprising in the least.

So a faggot retard.

He is definitely a ban-happy powerjanny.

How a lot of these people are even allowed on this site, I cannot fathom.

But which identity? That's the important question.

It doesn't matter to me, the point is I was commenting directly on a post and it was relevant. It got reported by a certain user who has close ties to the admins and I got suspended for an "identity attack" that never happened.

I could understand if I spam up the site promoting an agenda daily...but I don't.

To be honest, it looked like a joke to me.

You're not allowed to openly shit talk Jews. Come on, everyone knows the score by now.

Can you shit talk other identities? If so, can you show us?

TFW your site is literally built on being anti-reddit but instead goes full circle.

we were never asked about these overbearing reddit rules

I'm still trying to figure out why any of them were ported over. The only explanation that makes any sense is malicious intent.

I think the official excuse is that they didnt want the reddit sub banned, but frankly theyll ban it regardless of what we say here as no one can keep up with the tranny insanity on that site.

Soon tranny jannies will be banning each other after theyve run out of human beings and Chinese Shill bots.

I got banned for making a "we need a solution, a final one" in a post about Sweden. Tfw you're so paranoid you can't differentiate jokes about Jews and Muslims anymore lmao.

Why are jews so powerful? I saw that they run most media companies? Why is this happening?

Well yes it's an identity attack, you're asserting that jews as a race are pretending to be muslims so they can exterminate christians.

Frankly, it's also a violation of Rule 2 for technically calling to exterminate christians.