KotakuInAction2
Communities Topics Log In Sign Up
Sign In
Hot
All Posts
Settings
Win uses cookies, which are essential for the site to function. We don't want your data, nor do we share it with anyone. I accept.
DEFAULT COMMUNITIES • All General AskWin Funny Technology Animals Sports Gaming DIY Health Positive Privacy
29 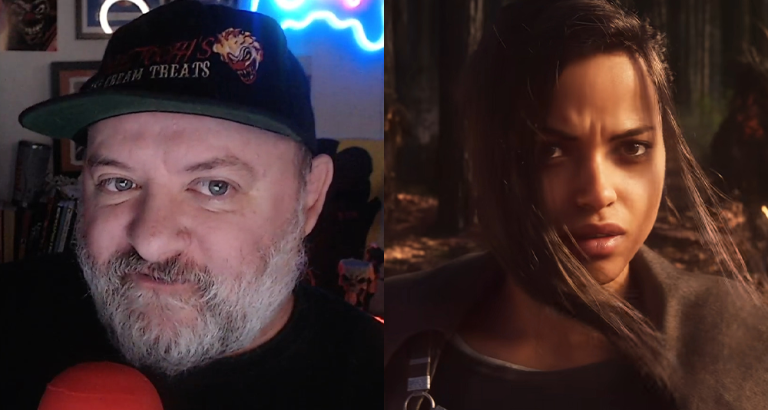 They literally made her an unlikable, angry, black female car thief who tells everyone to fuck off… We get he bought the game to jerk off with cuckmann on their strong wahmen fetish, but it doesn’t appeal to the majority of gamers.

We get he bought the game to jerk off with cuckmann

The interesting thing is that Amy Hennig is one of the writers for Forspoken and Druckman has all but ignored her existence after kicking her out of Naughty Dog because actual women in the industry wouldn't virtue signal for/with him.

Amy Hennig is one of the writers for Forspoken

Oh god, please tell me that all she did was world building for this fantasy realm, and not characterization (especially of Frey).

I mean, people asked for a realistic portrayal of women.

I think an abrasive thief that hates everyone is quite a good portrayal. It's just that nobody would want to empathize with it.

thank you for confirming the only reason anyone makes the lead a black woman is so they can use her as a shield for their failure.

Was thinking about this yesterday. We need a term that applies to pre-emptive woke-shielding in various forms so any and all [expected] criticism gets deflected with it.

Or at least is attempted.

Doesn't always work as quite a few recent productions have tried the "racist/sexist" line of attack on audiences and been met with ridicule.

I guess 'woke-shielding' could work.

LOL, even the most idiotic left wing journalists aren't even trying to make that argument... You'd think all the woke crappy outlets would give Square Enix game a 10/10 just because it features a black woman as MC but no...

This guy is just crazy or craving for attention...

No such thing as bad advertising.

Shes based off and voiced by an wmbf mulatto actress.

Shes mixed race, mulatto means half white half black. Her parents were a white male and a black female. I think shes also british.

Dude's gone crazy after Sony fucked his game release up. He should blame Sony but he goes after low hanging fruits to quell his rage. I think that's the state of most western developers. This is why I call'em spineless sellouts.

Look, I may not like women, or Black people, or… what was the third one?

Maybe if PlayStation didn't kill off all the games and franchises I actually liked....

Remember, having superhero-themed fun with a group prom date is misogyny.

Nobody likes female protagonists. They're more forced than...well, everything else women "succeed" in.

Why do we have to give up everything to people who have given us nothing but disdain? Get out of our spaces, the terms of engagement have changed.

Good women, if they exist, and if they are mad at this, take it up with your sisters.

Lara Croft was beloved. Granted, she was pure coombait, but still. I feel like there is a place for female protagonists so long as they’re well written. Frey would be an annoying cunt even if she was a man. Terra! People liked Terra in Final Fantasy 3.

Particularly amusing because Square has an entire history of having female protagonists and antagonists that people liked.

Square doesn't own Lara Croft anymore, didn't they sell it to Embracer Group?

Or Terra and Celeste, for that matter.

Square didn't originally create Lara Croft in the first place, so I wouldn't have attributed her to them anyway even if at some point the Square/Enix conglomerate bought up the IP.

Can't believe there are still people who call it 3 because of that short-sighted decision in 1994...

It's been 6 in the US since the release of Final Fantasy Anthology in 1999.

3 is the one with the Onion Knights. It even got a damn good remake on the DS.

We need to avoid confusion.

Ye, are angry at the game company, not gamers. Rewording it as “fun fact FF3 is FF6 I’m disguise, because of bla bla bla” will get you more positive results.

Can someone explain what he's talking about?

In 1994, in an incredibly short-sighted decision, Final Fantasy VI was released in the USA as "Final Fantasy III" because it was the third game to actually get released here.

This was before the internet--we couldn't easily look up that there were three other games in Japan at this point.

That one decision created decades of misunderstandings.

Square said "screw it" and called Final Fantasy VII by that name worldwide, to end this.

EDIT: Final Fantasy IV was previously released here as "Final Fantasy II" as well. Its translation was so poorly received (aside from one infamous line) that it led to Square looking elsewhere for localization help, which resulted in them hiring Ted Woolsey.

I think in the current political climate, you can't have a female protagonist without it being a tacit endorsement of women's hostility towards men, particularly in games, where they've been very open with said hostility.

GTA VI will prove it. They can write it as well as they want, but people don't want it - the question is, will they still buy for access to GTA:Online, a mode that has been out for nearly a decade.

Notice you had to go back 23 fucking years, I.E to when feminism was still dormant, slowly seizing power positions while pretending they just wanted to be equal?

Like I said, the current political climate makes a female protagonist a statement of tacit support for the hatred women are widely spreading towards men.

I don't think it's incorrect. Did anyone give a shit about feminism in the 2000s or even the 90s?

The 80s was the tradcon-radfem alliance that both sides deny ever existed. After that, feminism slipped into the shadows, with a normalized image and an opportunity to slowly build power.

The 90s was the Tipper Gore circlejerk about violent games.

The 00s didn't openly involve women in much, it was all about the War on Terror™.

The 2010s were all about gays, up until Trump got elected, when women stepped back into a position of influence to rant against the fact that they hadn't cruised to victory in 2016. They had been mostly silent because they believed they had won. Everything that they wanted would have come to pass. They seized the power they needed, they were ready to crown their queen.

The last few years have been them constantly in a state of lashing out and using every dirty tactic they can think of to try and make sure nobody gets uppity enough to reject their power next time.

Aren't you aware of the "sexual harassment" craze of the late 80s/90s? Michael Crichton even wrote a book about it. It wasn't that different to the "me too" craze, although the lack of social media meant "normal" women couldn't use it to get attention as easily.

That was the tradcon/radfem alliance. The Meese Report and the "Satanic Panic" were their two collaborations.

The 90's was third wave feminism remember riot girl trash. You must have forgotten about the proto sjw grunge thrash of the 1990's.

Maybe that was just an American thing. I definitely didn't read about it happening in England.

Riot girl was an american thing, it was popular with the feminists.

Dollars to donuts you'd whine just as much if I had only included examples from the last decade.

I've pointed this out many times, but the strong, ass-kicking hottie is a male appealing trope. Women do not want or care about such games. The only problem with Forspoken (besides the crappy, derivative gameplay and empty, pointless checklist world) is that the lead is ugly and abrasive. If she wore suggestive clothing and acted like a ditzy waifu it'd be weeb GOTY (see: Ryza)

There's been a strong, directed push in gaming right around the development of Dragon Age Inquisition to essentially take away all eye candy from men. Fat ugly stupid bitches don't want low-status gamer betas to have any access to women above their level, not even fictional ones.

Unironically the fault of Sensitive Joss Whedon more than anyone.

Buffy is the obvious example but there's also River from Firefly/Serenity as well as several characters from Dollhouse - all of which used the same stable of actors as well as included Joss' fetish for barefooted young women.

Anime/Weeb trope really, but yes. Joss has a tarded love for dumb weeb shit like "guy falls headfirst into boobs" in Avengers 2.