KotakuInAction2
Communities Topics Log In Sign Up
Sign In
Hot
All Posts
Settings
Win uses cookies, which are essential for the site to function. We don't want your data, nor do we share it with anyone. I accept.
DEFAULT COMMUNITIES • All General AskWin Funny Technology Animals Sports Gaming DIY Health Positive Privacy
71 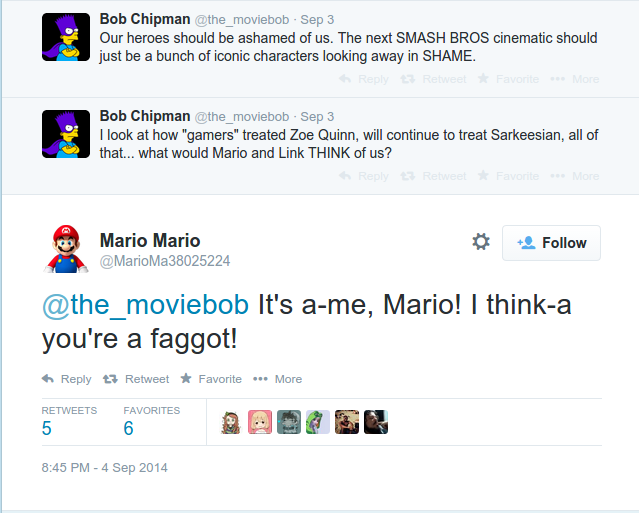 what would Link think

I dunno, what WOULD a soulless autistic sperg who compulsively smashes every pot he sees and runs around yelling "Ya" as he mows a field with a dagger think?

what would Link think

what would Mario and Link THINK of us?

God, I'm convinced that if Movieblob had been born 1 year later he'd be Chris Chan's twin.

I dunno. Chris is definitely crazy, but I think Bob has him cornered on murderous intent.

There's a reason you can play 'Hiter or Moviebob' after all.

Nah. Moviebob could never be Chris Chan. Even though it's a super messed up type of creativity, Chris Chan has more creativity than I've ever seen from Bob.

Impossible due to their upbringing.

Chris-chan is a perpetual man child because he was never forced to grow up nor did he had any boundaries set. Because of that his tantrums are that of a spoiled child until he's back to playing with legos.

Blob clearly had his shit pushed it and took a punch or two in highschool and even then rather than find solace in his own bedroom he was hiding away in his dad's car from the rest of the family. Because of that his tantrums are that of a begrudged child until he's back to consooming capeshit and living in the gaming world harder than VRChat junkies ever would.

Man the less I hear from Diabeto the more sane I feel.

Time for him to roll back to the kitchen

any day not listening to doctor fagneeto is a good one

not simping for that diseased whore is what lost me someone i thought was a friend.

It really is a testament to the miracle of modern science that fat fucks like MovieBlob can be kept alive despite the intense pressure of clogged arteries has on his brain.

7 years later and they're still simping for those whores.

Mario, the white, cis-gendered, heterosexual, American male attempting to stop a minority revolution in a foreign land, that wants to end the monarchy? Are we talking about that Mario? Fuck that fat facist.

FACT CHECK: The above statement is FALSE

Our rulling: Mario is Italian

This guy is still hung up on those two? Literally no one has given a shit about those two in years.

I wish that was the case but Anita is still grifting, case in point LOU2

Don't you wish you could just freeze yourself like Philip j Fry to see the future in a couple hundred years, when there's temples to the new gods Mario and Tchalla, and there's wars between the PSDCs and the Marvel-X Empires.

lmao i missed this picture of her, a natural genius, she rides her harley without pants

Suggesting to these retards that they want to fuck the person they're white knighting is an effective way to offend them regardless of whether it's true or not.

Wow, she's gained a lot of weight since then.

Appeal to authority is usually pretty weak, more so if the authority in question is completely fictional.