KotakuInAction2
Communities Topics Log In Sign Up
Sign In
Hot
All Posts
Settings
Win uses cookies, which are essential for the site to function. We don't want your data, nor do we share it with anyone. I accept.
DEFAULT COMMUNITIES • All General AskWin Funny Technology Animals Sports Gaming DIY Health Positive Privacy
49 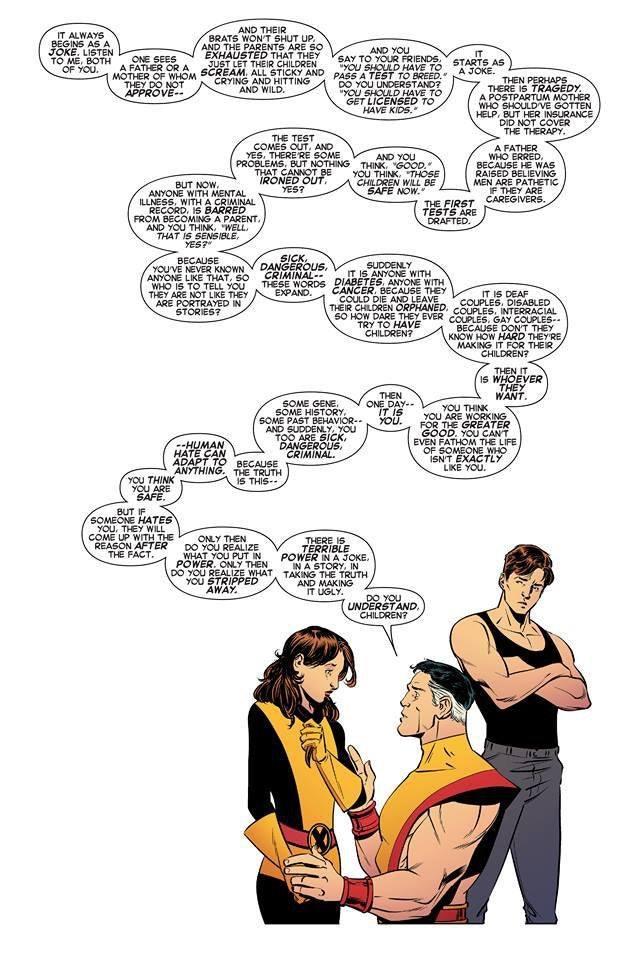 TL;DR: Leftie assumes that because they have no limiting principles, nobody else does, either.

Different side of the same coin that insists that if it didn't have its external limiting factor (that it must obey and follow essentially unquestioningly), they would not be able to limit themselves, so everyone else NEEDS their personal limiting factor, too.

Given how things are going, can you really say they don't have a point?

any fool can make a rule, and any fool will mind it

Cómics are the worst now. "The forgotten era of comics" that's what this period of comics will be called.

We've gone from the dark age of comics to the black hole age. :/

I read it all... And as usual they're self projecting.everythingstated is the lefts current behaviour re covid, elections, etc

And you just KNOW that they would be in favor of couples having to pass a test in order to breed....if those parents aren't in favor of getting a COVID vaccine. Regardless of the effect of COVID and the stillbirth rate, my point is that even Leftists would approve of a test. Everyone has standards. Some just start at a different point than others.

This. The speech isn't even necessarily wrong, but the projection is out of this world.

I tried but I tapped out. I'm not reading all that.

"Brevity is the source of wit" - some old dead white guy

No idea who writes this but no way this is a fan of older comics. Who reads this, if I see that I do not even bother.

But the concept of an idea going too far and being dangerous is way too hard to convey with anything but a ton of words and countless examples!

I can't think of anyone who could do it any better than the above image!

I have every X-Men comic from August 79 to July 08 when woke killed it for me. And when I say every I mean uncanny xfactor new mutie xforce Excalibur and wolverine, all the one shots annuals and limited, no mater how bad they were. If they killed a fan like me do you really think they are getting new fans? They don't know the history the lore or the fan base.

It doesn't start as a joke.

It starts as a thought.

Go ahead. Remove their thoughts.

A comic should never have more words on a page than a Japanese light novel does. There's no excuse for that.

Yet here we are.

I guess they couldn't be bothered to do more than one illustration for all of this, because that would take effort.

Holy shit. They always do this. LOL. They do not know what brevity is.

Ain't nobody got time to read that drivel

Same energy, as the kids would say

Accidentally told the truth about women there.

human hate can adapt to anything

only then do you realize what you put in power.

I mean, I agree with everything in the comic. Isn't that what is continually done to people? Government pushes to strip away their rights?

To those who disagree or dislike the image, with what lens are you looking at it? What prior knowledge to you bring to the table?

That the person who wrote that would support people they dislike requiring licenses to have kids.

This is the literal truth, though. Everyone on here can't stop talking about how 'first only the gays wanted to get married', and then turn on their heels and push this kind of shit.

Arbitrarily deciding who can and cannot do shit GOES WRONG. It's literally happening with the vaccination segregation RIGHT NOW. STOP. FUCKING MORONS.

Even people you dislike can speak the truth.

The fallacy part of the slippery slope fallacy isn't that it can't happen, it's just assuming that it applies to everything because it applied to one thing.

Everything about society is arbitrarily deciding who can and cannot do shit. You can't practice medicine without a license. You can't get that mortgage without a good credit score. You can't drink if you're not old enough.

It never progressed to the point where nobody could practice medicine or get a mortgage. At one point they actually tried to say nobody could drink but that didn't last long before everyone soundly told them to fuck off. So there's nothing inevitable about the slippery slope in every case, some things just naturally stop at a point the majority of society agrees is reasonable. It depends on the context and the process.

In the case of restrictions, that's a zero sum game, if you're saying there's a slippery slope of increasing restrictions then you're precluding the possibility of a slippery slope of removing restrictions (E.G. gay marriage -> transgender kids -> legal pedophilia) Unless you're advocating the very specific case that the the status quo is incredibly unstable and balanced on the knife edge of snowballing in the direction of whatever change comes along first.

A slippery slope of restrictions affecting an ever increasing number of people is not a natural situation, each step is harder than the last as an ever larger number of people are directly affected and will naturally resist it. It takes a considerable amount of social engineering and then some muscle to silence the dissenters who resist the conditioning to keep that process going beyond the point where it affects a majority of people.

But a slippery slope of removing restrictions on ever smaller groups can happen naturally in some circumstances. People obviously won't resist fewer restrictions on themselves and people don't naturally resist lifting restrictions on others unless they believe those others will do harm without restriction. If the biggest group of a collection of groups considered to be equivalent and potentially harmful manages to get the restrictions lifted and proves not to be harmful, then it can trigger a cascade where people no longer believe that the smaller groups will be harmful without restriction if the bigger group proved to be safe. Problems can happen there if society at large mistakenly lumps inequivalent groups together, such as believing gay is the same as transgender is the same as pedophile.

That doesn't change the fact that this is a really shit, low effort comic page

You're not completely wrong, but what you're missing is that the whole thing is a laughable strawman. Yes, "our side" jokes about not allowing unfit people to breed, and for 99% of people, it stops at being a joke, forever.

What I, as an actual conservative russian nazi troll white supremacist, would like, is to end welfare and affirmative action and related programs, including "diversity hiring" by private companies, because welfare only incentivizes unfit people to have kids and then fuck them up by failing as parents, and AA etc. only ensures the product of these fuckups can gain power and fuck over normal people like the spiteful mutants they are, despite being unfit to have any power over anyone but themselves. Take away the perverse incentive to have kids and raise them wrong, and it works just as well as banning certain people from procreating, except nobody needs to be banned from anything. Take away the way to gain power over others through being a fuckup, and the few kids who were failed by their parents will stop endangering everyone with actual merit.