KotakuInAction2
Communities Topics Log In Sign Up
Sign In
Hot
All Posts
Settings
Win uses cookies, which are essential for the site to function. We don't want your data, nor do we share it with anyone. I accept.
DEFAULT COMMUNITIES • All General AskWin Funny Technology Animals Sports Gaming DIY Health Positive Privacy
77 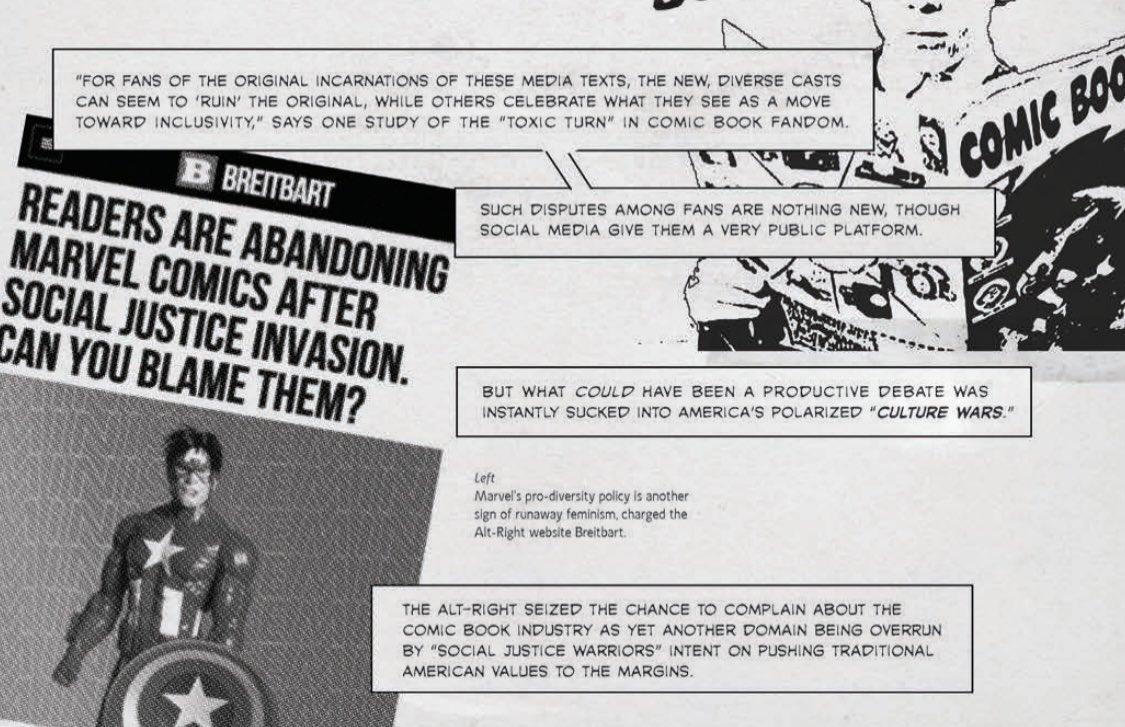 But what could have been a productive debate was instantly sucked into America's polarized "culture wars."

Marvel: Hey, folx! Iron Man is now a little black girl who is better than Tony Stark at everything and lectures people about their privilege!

The alt-right seized the chance to complain about the comic book industry as yet another domain being overrun by "Social Justice Warriors" intent on pushing traditional American values to the margins.

That's only because the comic book industry was yet another domain being overrun by "Social Justice Warriors" intent on pushing traditional American values to the margins.

The alt-right seized the chance to complain about the comic book industry as yet another domain being overrun by "Social Justice Warriors" intent on pushing traditional American values to the margins.

Yeah this sounded more like a complaint to me than anything else as well.

"The alt-right rolls eyes is complaining about air quotes the comic industry getting overrun by SJWs intent on pushing traditional American values out the door rolls eyes again."

"But they complained about it!! They aren't supposed to complain!"

They are using the famously hackneyed "Republicans pounce" trick that the media uses all the time. It goes like this:

So it's either Republicans doing the bad thing directly, or Republicans cynically criticizing Democrats for political gain. The media always frames the Republican actions as negative, and avoids talking about the Democrat thing.

Once you notice this trick, you can't unsee it. It's used all the time, and in fact "Republicans seize" is a variation I've seen many times.

Exact same thing here. Don't talk about the blatant ideological takeover of the comics industry, frame it like "the alt-right" is opportunistically pushing their agenda by noticing it.

A couple more points about framing.

But what could have been a productive debate was instantly sucked into America's polarized "culture wars."

This makes it sound like they were a disinterested party, and not the active aggressors in the "Culture Wars."

Not only is this the "pounce" framing I mentioned early, it also frames it as though only the dreaded "alt-right" were the ones with complaints about comics being turned into Woke propaganda.

Because only evil racist misogynist Nazis would complain about that!

This makes it sound like they were a disinterested party, and not the active aggressors in the "Culture Wars."

"What could have been a peaceful regime was instantly sucked into America's polarized "War on Terror".

Why would the Iraqis/Afghanis do such a thing?

"Is the Alt-Right in the room right now?"

They're touching me in my no-no places.

One hopes, because drag-loving lefties abuse the kids when we aren’t.

you're just mad that they caught on and gave you a name.

new, diverse casts can seem to 'ruin' the original

Yeah, a lot of people don't like large changes to existing characters. I very much doubt these people would be celebrating if Black Panther were made into a white character.

Which begs the question, why not create more diverse superheroes instead of appropriating existing franchises? (Rhetorical question, of course; these people are creatively bankrupt.)

study of the "toxic turn" in comic book fandom

Modern science in a nutshell: Start from the conclusion (that there was a "toxic turn") and work back from there.

And of course the idea that being against something or being negative is inherently "toxic" is ludicrous. They certainly don't adhere to that standard when it comes to criticism of the police or conservatives. On the flip side, there certainly are such things as toxic positivity and weaponized empathy.

I wish someone made a Black Panther comic that is either Han Chinese or Indian. Have a frail, weak Black Panther get saved by the hero from Tamil, lecturing him on how selfish his entire life has been, eventually having him put on the costume.

With his famous catchphrase: It's All So Tiresome

Hot take: race and gender swapping characters isn't ruining comics; the writing and art in comics has gone to shit and "diversity" is a smokescreen to distract from this.

One is a symptom of the other.

Nothing gets debated. Leftists get everything in media. The rest of us are left to abandon properties we've loved since childhood as people who hate us revel in the subversive nonsense. It's really okay though - I've done so many cool things since giving up all of this stuff

They literally had a villain say ”why’d they make Thor a girl instead of making a new hero” and then had female Thor hit him. Could they’ve been more insulting to the fans?

They are also framing it as the alt right, which I now read as boogie man, being the issue. Remove all the framing and you get “changes were made to classic characters, fans didn’t like it and now comic book sales are down”. When you look at it like that course correction is easy.

That was a line in Love and Thunder? Or the comics?

Either way, they are scum.

"Well, what happened was, they just started saying publicly it in front of cameras" -- JonTron (for reference: https://www.youtube.com/watch?v=DXprqpEAk0c )

Where is this faggotry from?

This faggot has zero fucking understanding of the so-called "culture wars".

This is an academic from an elite ivory tower thumbing his nose at the poors and peasants.

This is just a Left-wing chic tract

says one study of the "toxic turn" in comic book fandom

What study? I know the whole "sOuRcE?" thing is cringe, but what was the study about? Who the fuck is studying this, and how was it quantified? It sounds like they just dropped "study" as a way to legitimise what they were saying with nothing to back it up.

"You, there, on the rampart! Yes, you, Gate-Keeper! CLOSE THE GATE!"