KotakuInAction2
Communities Topics Log In Sign Up
Sign In
Hot
All Posts
Settings
Win uses cookies, which are essential for the site to function. We don't want your data, nor do we share it with anyone. I accept.
DEFAULT COMMUNITIES • All General AskWin Funny Technology Animals Sports Gaming DIY Health Positive Privacy
44 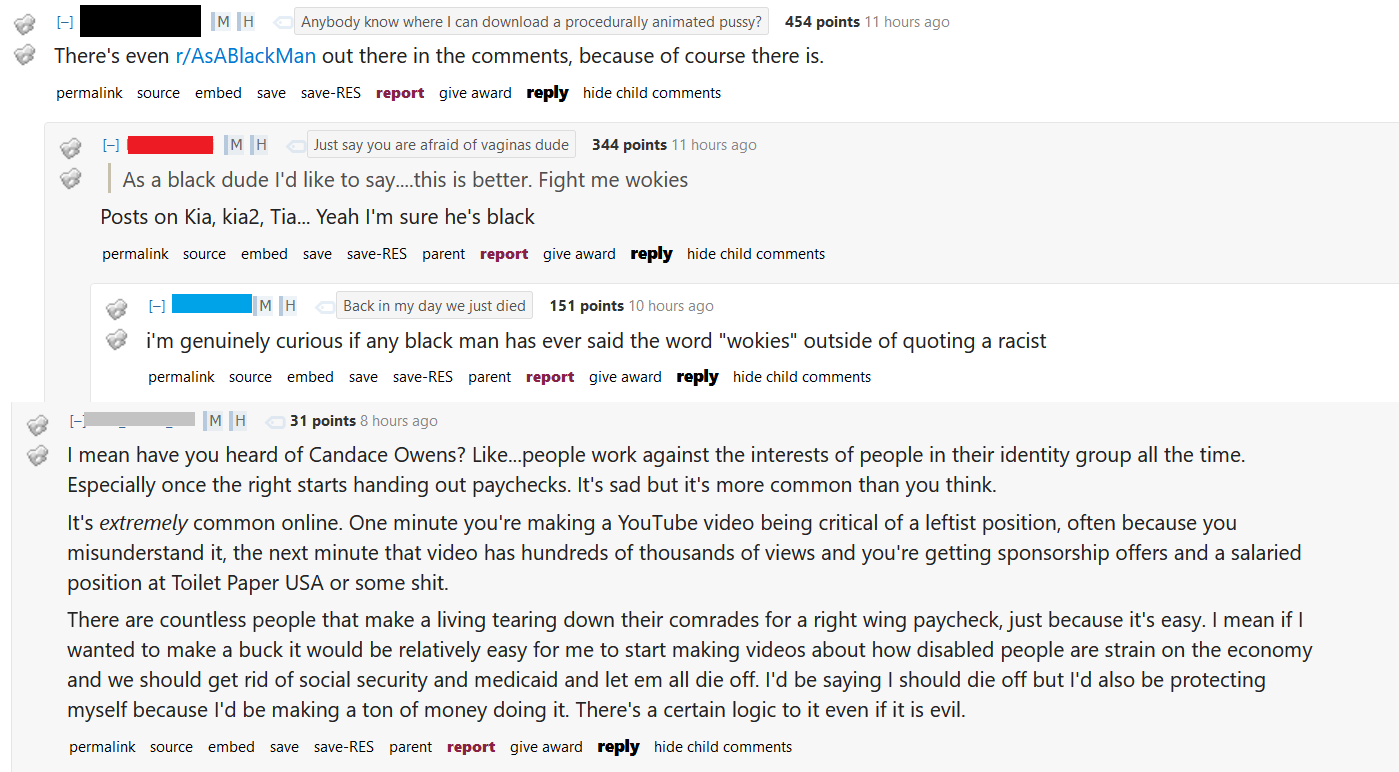 Can anyone explain to me how these retards can literally just shit out stereotypes of an entire group of people, believe that blacks are a monolith, denigrate their beliefs and decisions because they're braincucked consumers who believe everything they see through a glowing screen, and somehow not recognize how racist they actually are?

Is this really lost on them? Rhetorical.
Do these dumb assholes understand that their fantasies aren't real? I also love how that one dude at the end says "often because they misunderstand it," as if he's some thought provoking intellectual who really knows what's going on and the damn darkie just isn't quick enough to catch on.
These people hurt my head with how legitimately stupid they are. Actual psychical pain.
I'll bet they're young, too. Talking about how the world works while having never actually participated in it in any meaningful way.
When have the right ever argued that disabled people are a strain and we should more-or-less get rid of them? Anyone?
On a day to day basis, I see vastly more people on the left wishing death or harm on others than I've ever seen people on the right do. I'll also mention that I've very much looked before as well, just to make sure. You'll find the random one-off nutjob — but he's typically talking about "fight me off the internet! I'll kill you!" and not, for instance, celebrating Covid deaths, or wishing anyone who catches it who they disagree with it to die. Nor advocating for making re-education/genocide camps, etc. etc.
Consumerism really has turned them into complete drooling retards...
I take shits with more substance than them.

That's like the pot calling the kettle black on so many levels.

Nah, you don't understand. They're virtuous so they're allowed to dictate standards for other people.

We, on the other hand, are problematic, because even when virtuous people speak clearly and slowly we don't do what we're told, so we should be stripped of all of our rights.

Lol self admitted useless piece of shit, magical how these fucks cry about making money in self interest and in the same breath “I’m a disabled person” so I vote for all the gibs.

They're only black if they wear the chains of their democrat masters willingly, otherwise they're an uncle Tom, coconut, house nigger(HARDest R). You'll never find anyone more vile and -ist, -ism, -phobic than a wokie who thinks the offending minority isn't pushing lefty ideals hard enough.

Its always hilarious to see the people who prattle on and on about racism and oppressed peoples and all that bullshit start saying shit like "House Nigger" to the first black person that disagrees with them. Nutzo.

Do note the usual talking point of minorities working against their own interests. Because we all know that "the interests" of minorities are determined by some white neckbeard. This has a history.

Nor did the Marxist elites, when in power, have much respect for the masses. The Yugoslav Communist Anton Ciliga tells of how in the early 1930s the Soviet Communist intelligentsia and apparat already saw the masses, as under Fascism, as merely the raw material of the party. Joseph Berger, the veteran secretary of the Palestine Communist Party, was told, when in postwar Poland: "As a Party member you have no business to talk about what the masses want. They will want what we want." In face, this was put in even more authoritarian fashion by the Hungarian Communist leader Janos Kadar, in his address to the Hungarian National Assembly in 1957:

Only when envisaged in the abstract, as verbal icons, did the proletariat or the masses figure positively.

They're still using imgur, so that seems like a pretty safe bet.

Archives are obviously better, since faking a screenshot just takes a bit of HTML know how. I was just pointing out that imgur is heavily associated with reddit.

I used the same screenshot for both.

Screenshots aren't proof of anything. Go look up how "inspect element" works if you want to know more. You don't need to use imgur either. This isn't reddit.

There's a fun post on ConsumeProduct highlighting an Average Redditor "observing" the actions of showing a magic trick to "them".

It's funny, because "woke" is said by some to originated from black slang. So why shouldn't we use that word?

That was my belief on the etymology as well.

So why shouldn't we use that word?

Do you think it's been co-opted by sjw types? They love grabbing words and changing the meaning, which then spoils the normal use of the words. Of course, it depends on your company; if everyone in the room uses the first definition, the word effectively means that when you say it (as far as their understanding is concerned).

The present common definition I see for it basically means "blue pilled". Which is practically the opposite of what the origin seemed to have meant. I think part of the misunderstanding was organic since it may have been intended as a companion rather than a replacement for "red pilled" (theory seems backed up by your link that I skimmed), and nuance in slang can be difficult. The rest of it I'm ready to blame on co-opt efforts, but I'm interested if you have any personal insight for this.

Edit: My theory was off, as expressed further down in coversation chain. Leaving this post as is to evidence logical processing.

but I'm interested if you have any personal insight for this.

Sorry, I don't. I barely knew of the word before I started paying attention to things during 2014.

All good, had to ask.

That was my belief on the etymology as well.

Makes sense. I remember that anti-white MTV video being mad that white guys were saying 'woke'.

The present common definition I see for it basically means "blue pilled". Which is practically the opposite of what the origin seemed to have meant

No, that is actually correct. Because 'woke' (as John McWhorter explained) meant among blacks 'realizing' the great role that racism supposedly plays. So blue pilled.

Of course anyone who starts believing in a delusion will think that he is drinking from the font of pure wisdom. No one who takes the blue pill will admit to having done that.

Okay, I read the above linked article a little more closely and you seem to be right. My fault for skimming, I suppose. That's unfortunate, but at least it gets used derisively (I'll actually ask one of my friends if and how it gets used by his young coworkers).

I'm not familiar with McWhorter, but his field of study looks appropriate on wikipedia. I assume he is not quite the essential reading as Sowell is, though. I have more fun engaging strangers directly about language use, so I generally don't research the field deeply.

No one can reach the heights of Sowell, of course, but he often does make good contributions.

How do they have negative self awareness so consistently? I guess I need to look more into how cults operate.

...once the right starts handing out checks...

Nobody bother to try to explain to them how the dems use welfare. They'd either fail to comprehend it and spaz out, or they'd wind up having an aneurysm.

I can't think of anything more racist then the assumption that you own all the thoughts and opinions that can occur in a brown skin.

What sub even is this? I see the bad sex-based insult flairs and guess some feminist shithole.

That place still exists? I remember they banned me forever ago. Or was it r/drama?

Whichever one has a TwoX mod. They muted me for appealing the ban by saying "can I have a reason that isn't from a genocidal misandrist running a hate sub?"

SRD is an SJW sub.

I liked the " interest of people in identity group" .

Nations with uniformity of ideas lived in mud-huts for 5000 years.

The absolute fucking HYSTERIA comming from the retards at reddit.

They went maximum fucking unhinged and reacted like Trump was re-elected.

They really cant comprehend the idea that having same skin colour is not binding cant they?

Liberals have been using that vote for a party that is not in their interests forever. It's the right amount of sanctimonious dribble and condescending tone.

They also praise rich leftists for supposedly sacrificing their own interests for the good of the country, when as should be obvious, it's anything but...