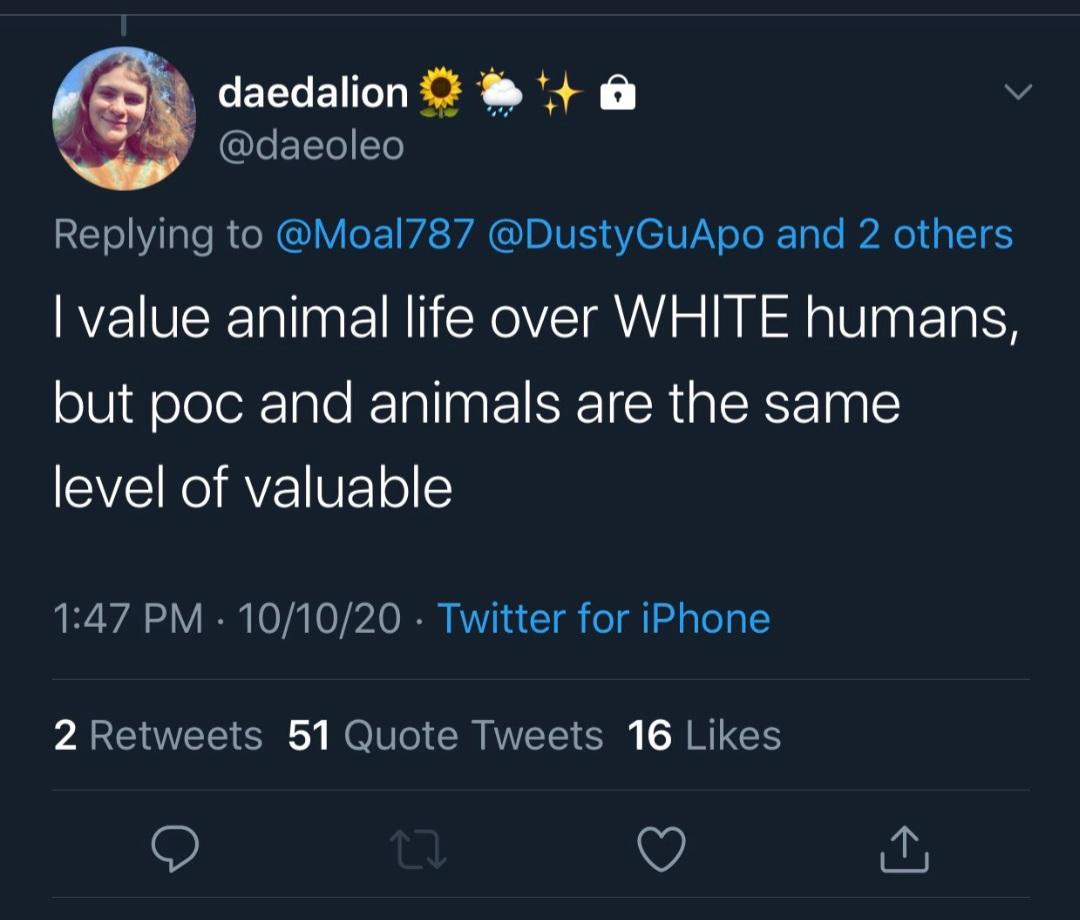 This is right along the same lines as Harris saying that the rest of the country should follow her example right after Pence described her practice resulting in a black person being 16x more likely to see prison time in her jurisdiction.

Even in the minds of the self-loathing wokesters, PoC occupy the same space as animals. Fucking hilarious.

A google search shows she (they?) deleted their account after this. Top kek.

So- WHITE people have autonomy, but colored people are innocent like beasts?

What he meant was even worse than what he said though.

Yes, POCs are the real and only victims here. Ugh.

Animals have more value than a leftist's pathetic life. Change my mind.

Leftists don't have less value, they have negative value.

Their existence itself is harmful to the world.

The other ones, not really, and there are countless on our side.

To clarify my statement on who has negative value. I mean all individuals that believe or push critical race theory and intersectional feminism. That means I include the woke pronoun idiots. I also mean all of the violent Antifa foot soldiers. I also include all marxists who want to overthrow capitalism. All of these people are leftists who actively harm members of society as they try to push their ideas forward.

The people I don't include in this are the following;

I generally agree, except for Marxists. But the kind I know are quiet, bespectacled old men who are just very misguided.

You should never underestimate Marxists based on age or how they look.

Marxism is an ideology that is responsible for millions of deaths in the last century.

Even if thess people say and are really against the pronoun gang, we would be giant fools to trust them.

To bring forth their utopia, Marxists wouldn't hesitate for a second to stab us in the back.

Marxism is an ideology that is responsible for millions of deaths in the last century.

Individual followers of an ideology can still be OK people. Unless you want to claim that once anyone is a Marxist, he's a bad person forever.

To bring forth their utopia, Marxists wouldn't hesitate for a second to stab us in the back.

Possibly, but we shouldn't put ourselves in a position for anyone to stab us in the back. In the meantime, we can use all the allies we can get. WSWS has done some very good work exposing this scam of a 1619 Project, e.g.

What a cretin, maybe medically.

Another proof Dems view minorities like animal stock and all the rhetoric about privilege is really projection.

Ever hear of "the white man's burden"? "Privilege" is basically just a modernization of that.

I heard of it as a joke.

Did we need more proof that white leftists and fellow whites view non-whites as the equivalent of pets and fashion accessories?

This isn't an oopsie. It's a stupid person, or mentally ill person. Who hangs out only with equally stupid or equally mentally ill person. They repeat stuff like this to each other, do the whole woke / big brained thing on it, then do it 1000 times more on similar topics until they work themselves up into a frothy furor about it.

Then they talk to a normal person and see the normal person shun them, and realize they can't do it with 99% of the population... but they can find others online who they can share their lunatic opinions with. The Internet has been great for bringing together the crazies in a way that never existed.

This explains a lot of the reactions to the George Floyd video. The feel it shows the equivalent to animal torture. The fact that he got himself into all that trouble by being a criminal and insanely high on drugs doesn't register.

But then they turn around and torture-kill a raccoon, and dismiss it as nothing, as a worthless life.

Meanwhile, the raccoon was likely a much better individual, species aside, than any needle-freaking fucking junkie. Why should I accept excuses for humans but not other species? And yeah, where I live, it's junkies that get into the garbage. They leave bigger messes than non-humans do, and with less good excuse.

Basically, she's an individual supremacist. Aren't they all, in the end? That's why they need to see "themselves" in every show/game/story and piece of art, why their fanfiction tends to be full of author-avatar "Mary Sues/Marty Stus" that turn the worlds they're ripping off into something that revolves around themselves .. instead, of course, coming up with their own worlds to put themselves in ... but they're not happy with modding or fanfic any more, now they want to run the companies and own the IPs. And of course, when the revolution comes, THEY'LL be the ones calling the shots and being the "good guys" (even when they're more like an Evil Empire), because NO ONE ever sees themselves as "evil" in their own story, and they never imagine themselves as being the ones shot, or at the very least, being stuck scratching by in a hostile wasteland after they kill civilization, and the technology it depends on. Or they think extended camping trips sound like "fun" because they've been coddled by civilization itself for too many generations.

I am guessing that this is a /pol/ fake.