KotakuInAction2
Communities Topics Log In Sign Up
Sign In
Hot
All Posts
Settings
Win uses cookies, which are essential for the site to function. We don't want your data, nor do we share it with anyone. I accept.
DEFAULT COMMUNITIES • All General AskWin Funny Technology Animals Sports Gaming DIY Health Positive Privacy
11 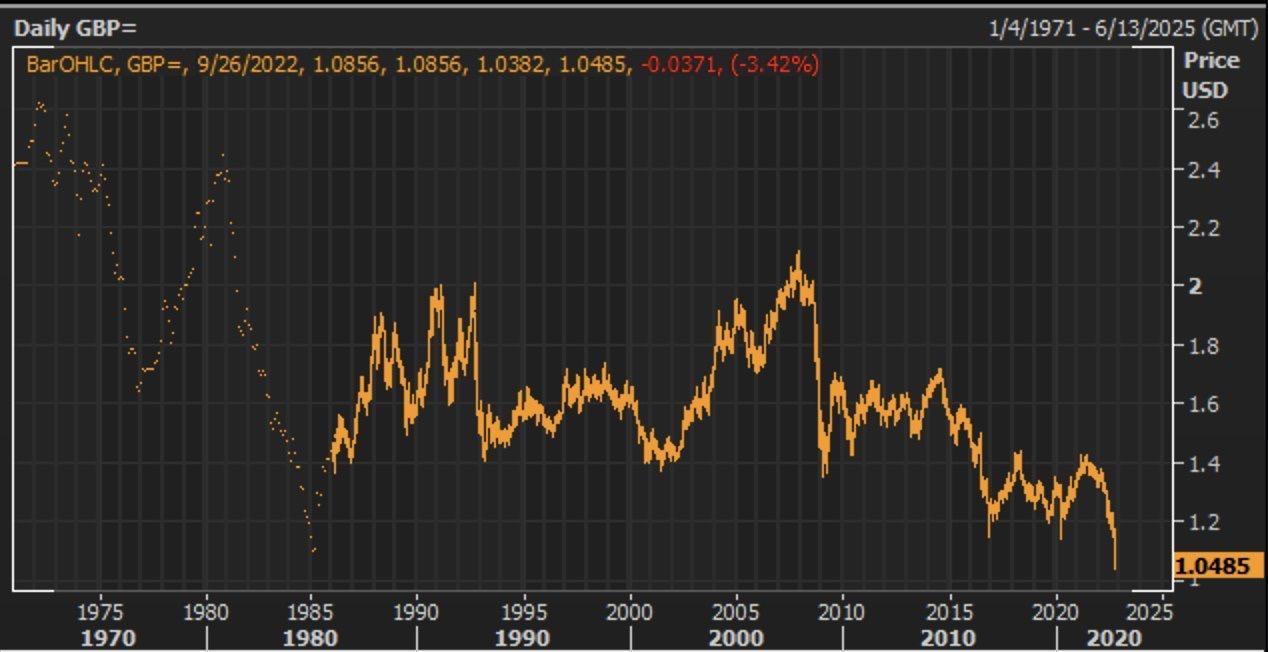 The euro, pound, and dollar will be at parity just in time for the roll out of a unified CBDC. Strap in folks. It's about to get so much worse.

They voted for Brexit and economic independence and they're getting a collapsing currency and a string of prime ministers who keep trying to implement ethnic replacement strategies.

It briefly hit 1.03 to the USD. Parity likely incoming as the central bank is keeping interest rates artificially low.

Argentina tried this two decades ago. It failed.

Failed at what purpose?

Hard to say, the country went through times so dark they wished the military would occupy them again. It's hard to figure out a goal when the country fails that hard.

they wished the military would occupy them again

Looks good to me. I was in the UK in about 2007 and a pound sterling was almost $2 USD. I couldn't afford anything in that country.

So does "conservative" government in Poland. It's especially hilarious when you put PM saying that 20% wage raise is going to cause Turkish level of inflation next to the bill raising it by 19,6%.

Westerners aren't paying for their reelection. I Do.

Westerners don't have to deal with local tax code.

They probably miss out out hundreds or thousands of various idiocies and absurdities due to language barrier.

I guess Party Chairman Kaczyński saying "Buy 1.5 tonnes of coal if you can't afford to buy 3" is better than "Let them eat cake".

Boy, I guess the grass is really always greener on the other side, innit?

Yeah, I don't love the polish tax code. I did like that they lowered taxes pretty substantially recently as part of their effort to combat inflation--but it's not gonna work so long as Poland is part of the EU which is pumping money like mad.

I'm curious what you think will happen when Platforma gets in?

Which ones? Temporary VAT?

I'm curious what you think will happen when Platforma gets in?

Is current PM going to advise opposition PM, like before?

It's probably going to more gay, although PO politicians my not want to antagonize church's lobby too much.

There will be probably as much redistribution as previously, since PIS has shown it's really efficient to bribe people with their own money.

They are also going to be more submissive to the EU, but won't likely add EU membership to Polish constitution, as PIS's President of Poland suggested.

Also, why do you think I want Platforma back in? Gang of Four must go (for a free chopper ride.)

The Income tax brackets were adjusted down to two brackets: 17 and 22 % on the first two brackets, with the first bracket from 0-80,000 (I think) and the second 80,000 to 1X0 000. I don't recall the exact numbers off the top of my head, but the change in income tax is quite substantial.

I agree about what to do with them all though. Let them all hang.

It was 17 instead of 12 and there was so called "middle class" relief, that was supposed to smooth the entry into the 2nd bracket, but that turned out to be a shitshow, so it was retroactively abolished, with reducing 17 to 12.

I'm self employed, so I can actually deduct part of 9% from my basis, but next year I'm getting increase on social security pyramid scheme tax, due to 2 minimum wage rises. I'm going to get about $13k this year and only get about 1.5% more income left, and that's nothing compared to covidflation and lockdownflation, cultivated since 2020.

This tax reform is largely meant to transfer cash to PIS'S voter base (lower class) from people that actually aspire to something more.

change in income tax is quite substantial.

Would you sell your vote for $30 per month if you were earning minimum wage? It's going to get eaten up by inflation real fast.

Pretty much anyone's gains are going down the drain due to inflation, All while dude that was warning about incoming deflation in April 2020 got reappointed as National Polish Bank chairman and dude that Invested 5 mil PLN in 2021 into Inflation-indexed bonds is still Prime Minister.

I recall the "new deal" being a real shit-show. I'm just happy to see income tax being lowered--the ideal amount should be somewhere zilch and nada. Thanks for providing better numbers, I knew mine were out of date and inaccurate.

I stand by my point that lowered taxes is good and helps with inflation, even if the amount will be swallowed shortly. People will get raises, hopefully and meanwhile the increased monetary velocity should help the economy.

The biggest issue facing Polands economy isn't who is in charge, though, it's membership to a gigantic money printer. Brussels is trying to print their way out of trouble and in the meantime sending a lot of money to Poland which basically erases anything the local government might due to fix their issues.

Boy, I guess the grass is really always greener on the other side, innit?

Yeah, that's what I think when reading your comments. I'll gladly trade places with you. You can come live in a country where perverts will groom your kids, and you get arrested if you call a man a man, where the ruling classes hate your traditions, culture and religion.

Well, I'm not hiring more than 250 people, so I'm in the luck. Good for the Poles for taking care of their people instead of just multinationals like in my country.

Good for the Poles for taking care of their people instead of just multinationals like in my country.

This is going to hit polish rising businesses more than international molochs than can generate costs like farts.

What's more hilarious, it's being pushed under guise of taxing state-owned business (including energy sector), that jacked up their profits margins multi-fold in the middle of the crisis(so much for taking care of "their" people), but also has special provisions that are pretty much aimed at public sector companies that can reduce their tax basis.

One thing countries could do to make their dogshit currency look less dogshit is to sell off US treasury bonds. It's what Japan's doing right now, which is why the bond market shit the bed last Friday.