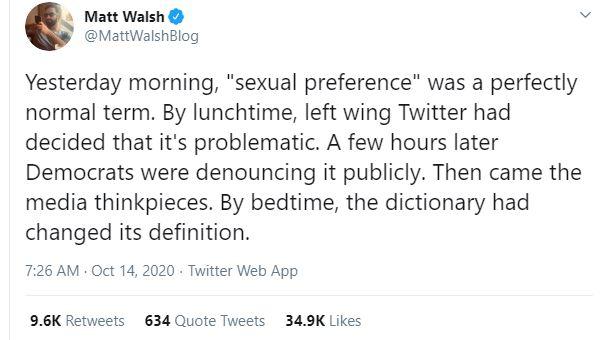 Now imagine them being able to do this with no one able to even point it out or bring attention to it without getting black bagged and shot in a basement. We're headed for that if we don't stop the Left dead in its tracks within the next decades, with the first real pushback being next month. We really are that close to an actual overt hard tyrannical government with secret police who will shoot you for going against Leftism. There could be people you know getting executed in a government basement prison before the Playstation 6 hits shelves. It really has come that far and will go there if we don't fight back and stop them,

My head is swimming

It's one of the most hysterical things I've ever witnessed. The speed was incredible.

As a straight guy, I would certainly ‘prefer’ to sleep with a woman over a man. I’m sure my gay brother in law would ‘prefer’ to do the opposite.

This personal preference doesn’t deny our base instincts, nor does it invalidate personal identity. Just as I prefer a decent cup of tea over coffee, this doesn’t mean all coffee-lovers should be offended. I’m wired this way, and as such I ‘prefer’ tea over coffee.

This is just another example of the permanently indignant exercising their new-found influence over the weak. And the Orwellian morphing of language to suit political ideals and identity politics is ridiculous and dangerous.

If an innocuous word can be weaponised in such a way, there really is no level to which these people won’t stoop.

I don't waste brain cells taking them seriously anymore. I just treat all their outbursts as fart noises. My company is slowly leaning into the terminology. They're currently mass-deploying the "uncomfortable conversations" lingo. It's going to be interesting when they start sending us to "how many lights are there" trainings.

I intend to just deny and resist until fired. I don't really have any plans after that. Die I guess.

Live. And rub it in their noses.

I have found that spite has kept me going the last few years.

Spite, anger, and hate are perfectly good emotions. They protect you from those that wish to do you harm. You just can't let them control you, like any other emotion.

Yeah, I could work with that.

Just as I prefer a decent cup of tea over coffee

That's a hate crime right here if I ever have seen one.

I’m British. Can’t not have a good cuppa.

With the right license, you can, I guess.

Keep those physical dictionaries, people. In fact, find the oldest one you can. It is worth its weight in gold.

How much fucking koolaid do you have to be chugging to look at this behavior and think its normal? How can any sane person look at this, and think "These are the people I want in control."?

Socialists truly deserve the hellscapes they turn their countries into.

It's chilling to look back at the original Gamergate conspiracy and see it as a kind of testbed for this kind of brainwashing. No wonder they see us as a boogeyman for resisting.

Having a problem with dictionary definitions being changed all the time is counter-revolutionary comrade.

But remember folks, it's not the left who are fascists. The left are, according to the left, sugar spice and everything nice in the world. When the pendulum swings back I hope history remembers every single one of them for the monsters they are. I hope no-one ever forgets what these dictators have done.

When the pendulum swings back, whether it be 10 years from now or a 100, they will get the enemy that they so seek. People only remembering their actions will be the least of their worries.

Implies the left are the real fascists.

Left: Wait until we change the definition of fascists.

This is worse than Orwellian. In 1984, it took them years to revise the Newspeak dictionary

We have always been at war with sexual preference.

This is why the Democrats are a wing of the corporate press, and not the other way around.

Is that a meaningful difference?

I think it is. Despite what many on this sub think, its vital to this country that we have a sane right AND left, lest we return to the days of the "moral majority" evangelical right-wing.

As such, it is vital that we choose the correct targets. Taking out the Democrats won't stop the corporate press. You have to destroy the actual cause of the affliction.

Hang the press, I'm for that idea.