KotakuInAction2
Communities Topics Log In Sign Up
Sign In
Hot
All Posts
Settings
Win uses cookies, which are essential for the site to function. We don't want your data, nor do we share it with anyone. I accept.
DEFAULT COMMUNITIES • All General AskWin Funny Technology Animals Sports Gaming DIY Health Positive Privacy
19 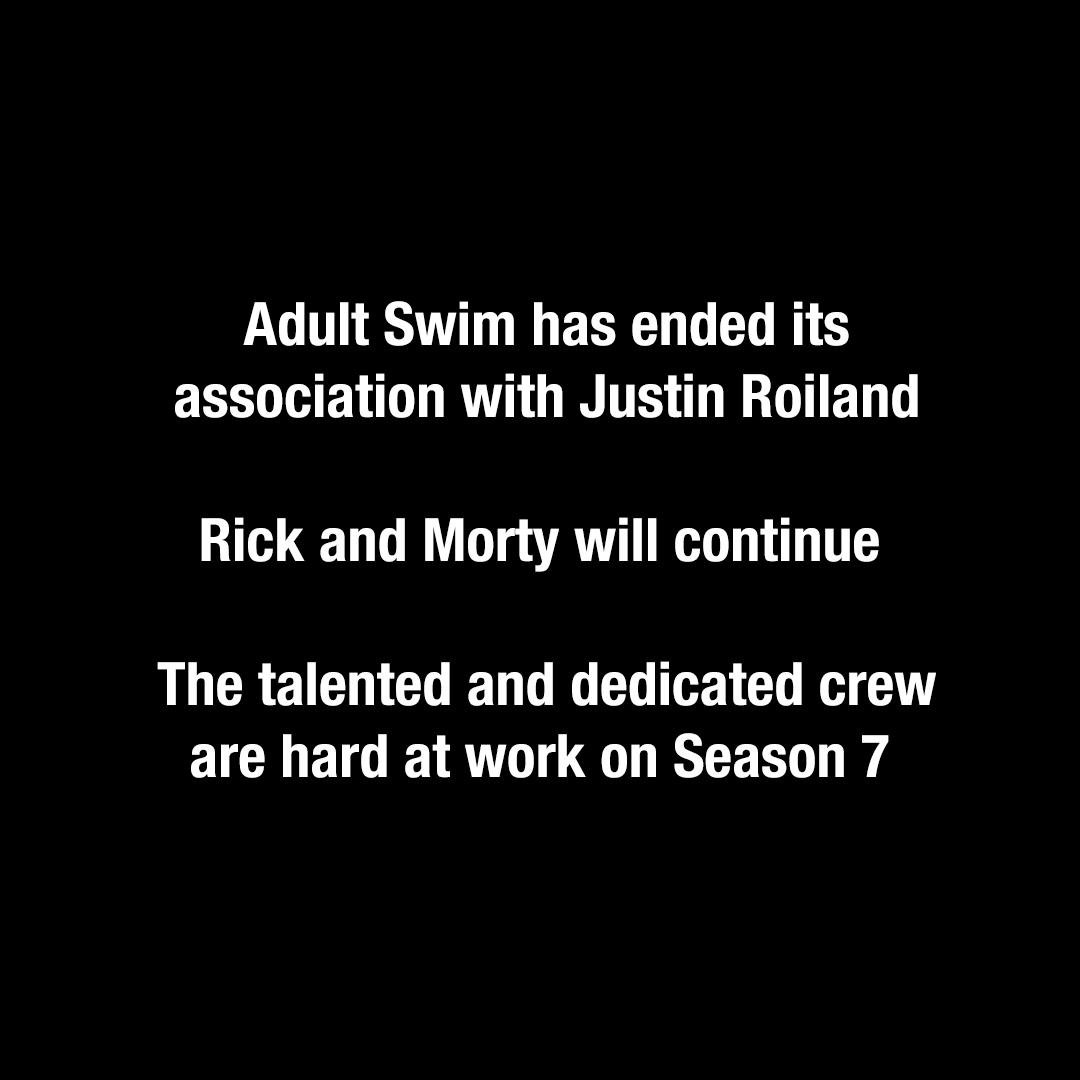 While, I don't follow Rick & Morty nor would I consider myself a part of it's fanbase.

I'd watch it occasionally and thought it had some unique flair that was sorely missing from most comedy TV.

Now this "Guilty until proven innocent" shit does not sit well with me at all. People on Leddit of course are cheering and demanding blood despite this issue not going to trial yet.

It's like the populace learned absolutely nothing from Depp's trial. Women making accusations of shit CAN NOT BE TRUSTED AT FACE VALUE. It worries me immensely that any son of a bitch can make a claim against you 2 years after the fact, it be completely false and you lose everything.

If it goes to trial and it turns out Roiland didn't do it, he is going to be insufferable.

I cannot stand the man. But that's not the issue. The issue is, did he do this particular thing?

he is going to be insufferable.

You know though? If I were in his shoes and was proved innocent I'd also bitch from the highest mountain top about this mob justice shit.

Exactly it, if he come to find did NOT do these things then the man just had his career ruined on no grounds. The woke lefties that cry for blood on this shit just drive me nuts, fucking morons don't understand the wider reaching implications of this sort of thing.

As if this didn't JUST happen to Johnny Depp who was innocent on all counts.

People on Leddit of course are cheering and demanding blood

There is a delicious irony in Redditors being so unabashedly obsessed with the show since the beginning, getting their very own copypasta about it, and then turning on the creator the very instant it becomes convenient for them, and essentially demanding its downfall. So much for that 'high IQ,' I suppose.

Now this "Guilty until proven innocent" shit does not sit well with me at all. People on Leddit of course are cheering and demanding blood despite this issue not going to trial yet.

So this isn't about the Twitter bullshit, it's about criminal charges:

In January 2023, it was reported that Roiland was charged with felony domestic battery and false imprisonment in Orange County, California, in connection with an alleged incident in January 2020 toward an unnamed woman he was reportedly dating at the time. A hearing is scheduled for April 27, 2023.[21][22] Adult Swim announced later that month that Roiland had been dismissed from Rick and Morty due to the charges and his roles would be recast for future seasons.[23]

I couldn't give less of a shit about charges like that. Any good man who dates crazy girls can easily end up trapped in charges like that. It isn't proof he is a wife beater or anything. He probably got into it with some thot and it's super easy to get charges like this: smack her once AFTER she hits you 1st, and stand in a doorway = these charges.

Whatever happened to innocent until proven guilty?

Also I'm pretty sure since Roiland basically created the show, he must have ownership rights.

And... RECAST? HAhahahahahah the show is fucking dead.

Roiland is the main creative genius behind the show. It was his concept and his creative ideas and his characters. Imagining that you can make the show without him and change all the voices is fucking laughable.

I hope he leaves and makes his own show called "Mick and Rorty" and just remakes the show. I'll follow him to whatever he makes. Solar Opposites is actually a pretty good show purely because of him.

Any good man who dates crazy girls can easily end up trapped in charges like that.

This is exactly what happened to Marv Albert, the legendary basketball announcer, in 1997. A woman told him to bite her, hard enough to leave a mark...and then used that bite mark as evidence of assault. It got him fired from NBC.

Thankfully he was able to recover his career, retiring in 2021.

I had an ex girlfriend who I knew was crazy but stayed with her anyway because the sex was fucked up and hot.

She tried to get me to beat the shit out of her lots of times. I was willing to do it to a limited extent during sex, but stopped later on because I didn't trust her. I was right, and despite her swearing to me many times she wouldn't turn on me, as soon as we broke up, she completely rewrote the history of our relationship to falsely portray me as the abuser and herself as the victim, despite her actually being a lying piece of shit the whole time and me putting up with it because she made my dick hard.

This is typical for women with borderline personality disorder. They're monsters. That's why you absolutely can't "believe all women". Some of them are like Amber Heard, like my ex was.

I bet Imp has a history with those, which ended up painting his view of all women...

You have to have a beginning in order to have a history.

No, that's not the case.

Well, nice to hear from the horse's mouth, at least.

Probably not. To truly hate women on his level, you need to get consistently rejected by them.

I feel the way I do about them for reasons that would break Rule 16 if I said them fully, but I'll TL;DR it.

They are complicit with everything harming men and gladly take the benefits of such actions while swearing up and down that they have nothing to do with it. We saw with the TERFs how much influence they can have on literal non-issues if they want to, so it's a pack of fucking lies.

They will gladly step on our necks if it means they get a few extra cents. Women are more interested in hunting down "misogyny" that might break their simp brainwashing tactics than their performative at best support of our basic human rights.

My gf is nice and does everything for me and asks for little in return. She's not at all like you describe women to be.

toward an unnamed woman he was reportedly dating at the time

This REEKS of bullshit. The amount of false complaint by scorned roasties is alarmingly high.

Fuck, I had a crazy ex who said all sorts of shit about me that were in no way true. God forbid that had taken place in this day and age I'd have lost everything.

The amount of false complaint by scorned roasties is alarmingly high.

100% true and the reason guys correctly say "don't stick your dick in crazy".

I stuck my dick in crazy and got false accusations against me as a result.

Fuck, I had a crazy ex who said all sorts of shit about me that were in no way true.

Yup, been there, brother.

100% true and the reason guys correctly say "don't stick your dick in crazy".

the problem is sometimes women go crazy when the relationship goes south. Temporary insanity could be a legit defense for a lot of women.

What I'm wondering is why it took 3 years from the time the incident occurred for them to charge him. Did the accusations come out only after the break up?

One possibility is that they decided not to charge originally, and then after the recent twitter bullshit targeting Roiland got press, some attention whore prosecutor said "wait, didn't we have a report against him? oh and it's just barely inside the 3 year statute of limitations? LETS GET HIM!"

More like he stole the concept of back to the future and made it for potheads.

Is there any noteworthy evidence, or is this Vic Mignogna mk2?

The legal system bends itself into a pretzel to "protect the identity of the accuser" in a situation like this even though it is totally unwarranted. This is especially true in Orange County, California.

I haven't autism dived into it much yet. Just saw the news break.

All I know is that this has yet to go to trial in any form and it's mostly media speculation.

It's a case involving women. Assume the woman is malicious and you'll be right.

“We don’t like Justin Roiland, but will continue to profit from his work.”

I'm sure Cartoon Network will try to milk this cow for all it's worth, and then some, but I really don't see Rick and Morty surviving this loss. I don't think it's an exaggeration to say that Justin Roiland is half of that show. At the risk of sounding like I'm putting him on a pedestal, I don't think the people they'll replace him with measuring up to the challenge.

He's being punished before proven guilty, and Season 6 was terrible. Do you think this would be happening to him if R&M was still highly successful?

JK fucking Rowling? - she already has ties with WB, they're publishing her dumpster fire game.

So, will Epic also cut ties? There are Rick and Morty items still in the shop files.