KotakuInAction2
Communities Topics Log In Sign Up
Sign In
Hot
All Posts
Settings
Win uses cookies, which are essential for the site to function. We don't want your data, nor do we share it with anyone. I accept.
DEFAULT COMMUNITIES • All General AskWin Funny Technology Animals Sports Gaming DIY Health Positive Privacy
30 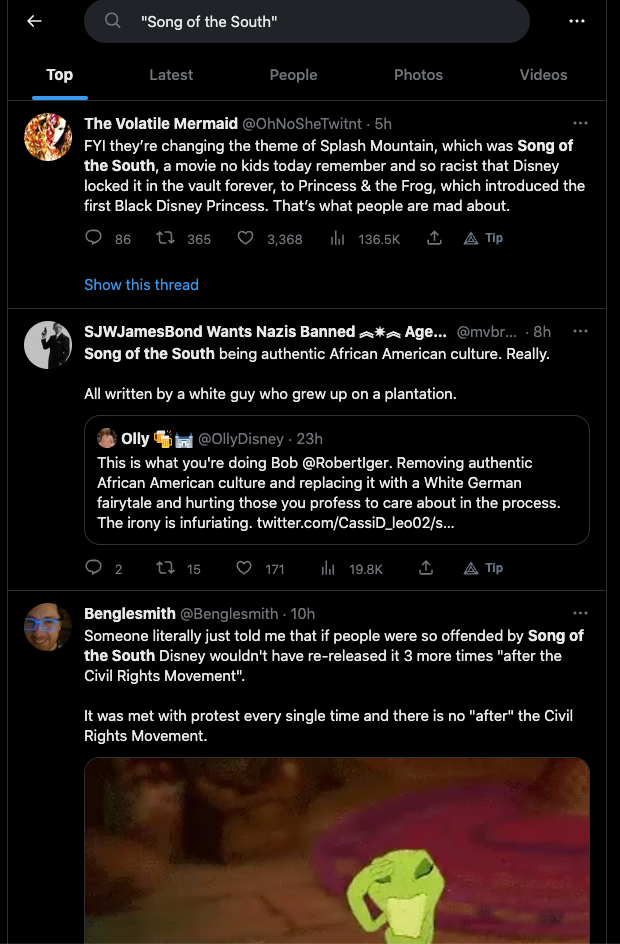 This bothers me, as bre'r rabbit is a genuine part of African-American folklore. The idiot disparaging it as "written by a white guy" is missing the context that HE KNEW HOW TO WRITE. These stories were a part of oral tradition and might have been lost if someone didn't bother to record them at all. But no, it's better to replace it with some shoddy product (which was also deemed problematic because, for most of the movie's runtime, the black princess isn't even human) because ... because Disney said so? Same as what happened with the Maelstrom ride, which was about genuine Nordic culture, now replaced by Frozen ... which was inspired by it. Poorly.

Everything that made the Disney parks different than just another amusement park (Walt's vision) is being stripped away.

Well Walt was anti commie but the company is named after him. So they are destroying it slowly

Exactly. The guy who wrote it acknowledged that he got it from oral tradition of former slaves who couldn’t read or write.

it's racist for people to say that a white man cannot chronicle black southern culture when he bore personal witness to it.

I'm laughing because the dude was a "progressive" too:

Harris led two professional lives: as the editor and journalist known as Joe Harris, he supported a vision of the New South with the editor Henry W. Grady (1880–1889), which stressed regional and racial reconciliation after the Reconstruction era;

At the age of 14, Harris quit school to work. In March 1862, Joseph Addison Turner, owner of Turnwold Plantation nine miles east of Eatonton, hired Harris to work as a printer's devil for his newspaper The Countryman.[5] Harris worked for clothing, room, and board.

While at Turnwold Plantation, Harris spent hundreds of hours in the slave quarters during time off. He was less self-conscious there and felt his humble background as an illegitimate, red-headed son of an Irish immigrant helped foster an intimate connection with the slaves. He absorbed the stories, language, and inflections of people like Uncle George Terrell, Old Harbert, and Aunt Crissy.[6] The African-American animal tales they shared later became the foundation and inspiration for Harris's Uncle Remus tales. George Terrell and Old Harbert in particular became models for Uncle Remus, as well as role models for Harris.

Damn. Almost unbelievable to think Putin had supporters even back in the 1800s.

Excuse my blog post. I once suffered through watching Back to the Future with some very liberal friends (this was in 2018 or so). While watching, one of them pulled up an article about how Biff in part 2 was based on Donald Trump. It makes sense, as it was filmed in the late 80's and he owned a casino in that movie. Somehow, they extrapolated this to mean that Biff was also based on Trump in the first movie (the one we were watching.) They began saying that him trying to rape Lorraine made so much more sense, considering Trump's "grab them by the pussy" attitude (a quote which didn't become known until 2016.)
That's when the horror struck me: despite being fans of a time travel movie franchise, their liberal hivemind couldn't think four-dimensionally. Trump was ALWAYS known as "grab them by the pussy" man. Ukraine has always been under threat by Putin. And, of course, Oceania had always been at war with Eastasia.

Better not show them Gremlins 2: The New Batch. That movie also has a character based off Trump, but depicts him in a much more positive light (it might be the only positive depiction of him in any form of media to be honest). Your friends might just burn down the house.

To be fair his friends would probably burn down the house anyway...

Forgot about that one. It's so ridiculous how much of a gasket lefties blow from such an innocuous scene.

there is no "after" the civil rights movement

Whenever I see someone say this I ask them to tell me specifically what it is they can’t do. I then say without using nebulous or vague stuff like disparities or systemic something or or other

There MUST be a struggle. They HAVE to struggle against SOMETHING.

Thus, they can never be happy. Ever.

Want to know another Disney movie that no kid remembers? The Princess and the Frog. It was such a commercial disappointment that it pretty much killed Disney's 2D animation division. Goes to show that all their attempts to pander to black people and specifically consulting their empress and champion of melanin superiority, Oprah, didn't produce a product anyone was actually interested in.

And unlike Song of the South, it doesn't have the excuse of being forcefully out of print for decades.

Ehh 2D animation was already struggling hard in the West (and Disney itself is partially to blame for intentionally sabotaging its 2D animation department from 2000 onward). That's why Disney had already shut down its 2D animation studio the first time. The Princess and the Frog was them coming back so they wouldn't have to say that utter piece of shit Home on the Range was the last thing the division did.

They did it in 2D because people wanted 2D back but disney wanted to save money and time so they intentionally made a sub par movie and marketed it like shit to "prove" 2D animation was dead.

True, though I have to say Disney chose the worst kind of film to try and "revive" (whether genuinely or not) 2D animation. Namely, another princess film (or at least one that was posing as a princess film, considering that no one was really a princess in it). Boys and grown men don't like princesses (and the latter that do are really not the types you want to bring to a film for children), and there was a strong push at the time discouraging girls from consuming princess-related media. In retrospect, it feels like the film was just a giant virtue signal, because the only hype it got was that it was the first Disney movie with a black princess in it!

Doug Walker, of all people, had the best take on the movie for Disneycember one year.

TL;DR, he said people should watch the movie and make up their own minds. That sounds fair.

Maybe he's tired of his tax dollars going to Ukraine

Did you know we can trace Brer Rabbit to Anansi legends, and thus show how cultures have changed and grown? Even Neil Gaiman referenced it back in the day.

This is a culture being destroyed by white people who think they know better.

Disney has wanted to change Splash Mountain for years, but they lost too much money to Covid, their fight with DeSantis, and all their trash movies and shows.

Fun fact: in addition to the frog thing, proto-sjw's flipped their shit during development because a character was going to be named 'Maddie' which kind sorta sounds like mammy if you're ears have wax in them.