KotakuInAction2
Communities Topics Log In Sign Up
Sign In
Hot
All Posts
Settings
Win uses cookies, which are essential for the site to function. We don't want your data, nor do we share it with anyone. I accept.
DEFAULT COMMUNITIES • All General AskWin Funny Technology Animals Sports Gaming DIY Health Positive Privacy
142 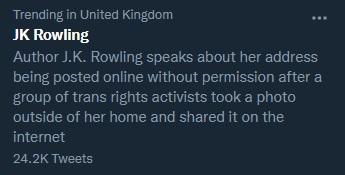 So those who have been around the wokesphere long enough know that Just Kidding Rowling was previously on side with the wave of woke that infested modern media. She would attempt pointless retcons of her Harry Potter material [that many fans became fanatic about to the point "Read another book" became a meme because they centered their lives around the franchise] such as claiming Dumbledore was gay despite there being zero material suggesting it other than a throwaway line I think in one book.

Tumblr and SJWs latched on to Harry Potter and went full throttle with the wokewashing that was being made like when it was claimed Hermoine was black, despite there being an actual link in the book explicitly describing her pale face.

Then it all went wrong, because while JK may have been as mad as a box of frogs she was still a biological woman and disliked the idea of men dressing up being in the same places she would be changing. Of course this made her an over the night pariah to the woke and she quickly gained the label of TERF.

In general she didn't seem to have much care for the self identification side of things, she just didn't want grown men in changing rooms with women where both would be in various states of undress. When points were raised about how this would lead to assaults against women it was decried as something that "doesn't happen". Except it does, and has, many times by now as news stories keep coming out about such things "never happening".

Anyway, long story short because her previous wokewashing put off the non woke, and because she "went full TERF, reeee" her previous audience dwindled to a point that it's a mere shadow of the former state it used to be in. Many wokesters even flat out reject the books now because they are tainted by her more recent statements, although there are rumors a director wants to make "The Cursed Child" with the cast of the original films. For those who don't know, first count yourselves lucky, and second it's a literal fanfic sequel that uses time travel to change big events and insert a Mary Sue that's the child of Voldemort into things. It was made into a play which JK kind of gave her blessing to and now it's being pushed as a potential film. With the current state of the franchise fans however maybe the world will be spared literal Tumblr fanfic in action.

Now TransRapeActivists are doxing her by posting her address online but because of the previously mentioned exodus of fans on both sides she has very few people willing to defend her because the ardent wokesters have drowned in the Kool-aid and the rest are buying popcorn.

Legit though, read another book is one of the most true memes of our time. This was seriously the only literary/film reference for most of these people they ever have experienced. It was freaky funny lol.

It's even more infuriating, they pick and choose the lessons so that people I don't like=voldermort but those pesky lessons like the importance of not relying on the corrupt government to protect you or how the media manipulates the truth and manufactures opinion? Totally not applicable, stop being a bigot, bigot!

This is just like the time that harry forgot his books at school, and ron had to run back to the dorms to get them for him. #just dumbledore things

Add Twilight in there and this sounds like my sister....

So those who have been around the wokesphere long enough know that Just Kidding Rowling was previously on side with the wave of woke that infested modern media.

A lot of us hung out with the snakes until they started to bite us. Amazing grace and all.

Strange times when the opinion of 95% of thee population can make you anathema.

How dare you name them after that thing that never happens and didn't happen in Loundoun County?

but because of the previously mentioned exodus of fans on both sides she has very few people willing to defend her because the ardent wokesters have drowned in the Kool-aid and the rest are buying popcorn.

This is pretty sad. If we want people to stand up for what is right, then we should defend them when they do, even if we disagree with the other stuff.

This is pretty sad. If we want people to stand up for what is right, then we should defend them when they do, even if we disagree with the other stuff.

I'd agree however not only are some wokesters so deep in resentment and anger than not only do they bite the hands that feed but also the hands offered to them in assistance. Scorpion and the Frog isn't something anyone wants to have playing on repeat.

Yes, beware of the snakes. But we've gained valuable allies as a result of attacks by SJWs. Always be open, but don't trust them immediatley.

Trans: We are totally not mentally ill!

If I had fuck off money I wouldn't care one iota about this. People wouldn't even know where I am. I don't have social media accounts without fuckoff money ...

If I had fuck off money

Which was one of the stupid points about all the HP books the woke then burned.

YOU ALREADY BOUGHT THE BOOKS AND GAVE HER YOUR MONEY!

You can't think of it in purely material terms. Burning Harry Potter - or Nikes - is a symbolic gesture that you want nothing to do with it, and you do it by taking an irrevocable step. It may look stupid in the modern world, but it's not necessarily about money.

There's already a non-binary in the new battlefield game. Surely this will calm them down

WamenfieldVah sold well, its good that dice doubled down on the political messaging.

Not all "TERFs" are even actual TERFs at this point as like with many buzzwords it's thrown around simply for the weight it carries. Or use to since many just don't give a fuck because it's been overused.

Those guys were lucky, most people who yell that are in the midst of getting a lead-based trepanning.

Yep, they should be thanking every deity they know about for the invention of second storeys. And that the mob was too busy to use fire.

Hah, I was just enjoying that video yet against yesterday. Youtube has made it almost impossible to find.

Dude why the fuck are they still worried about her? They're just proving her right that they're a bunch of nutters

They're just proving her right that they're a bunch of nutters

That was already obvious a long time ago

Then after the successful Brexit vote, immediately said that Scotland had to do the right thing and leave the UK.

She can still figure a human male is not a real woman, but she's an enthousiast user of the "teehee, you're a nazi" when people don't share her ideology and her Twitter bubble emboldens her.

Pretty sure it was the trans lefts activists.

PC culture has put all Western nations into serious turmoil. She promotes PC culture, most of it. She can afford to hire personal bodyguards, move, whatever, while most non-PC people can't. No sympathy for her. Let her and her evil PC compatriots have each other.

All feminists (JK Rowling is a rabid one) deserve what they're getting. They promoted a society where immutable features are valued over content of character. That's why in the war between TERFs and TRAs, I fully support TRAs. It's about time feminists get a taste of their own medicine.