KotakuInAction2
Communities Topics Log In Sign Up
Sign In
Hot
All Posts
Settings
Win uses cookies, which are essential for the site to function. We don't want your data, nor do we share it with anyone. I accept.
DEFAULT COMMUNITIES • All General AskWin Funny Technology Animals Sports Gaming DIY Health Positive Privacy
90

“Actor Lenny Henry Confirms Radical Changes To Hobbits In Amazon’s The Lord of the Rings Series”; “we’re hobbits, but we’re called Harfoots. And we’re multi-cultural. We’re a tribe. We’re not a race. So there are black, Asian and brown, and even Maori types within it.” (media.communities.win)
posted 4 days ago by Vsid 4 days ago by Vsid +90 / -0 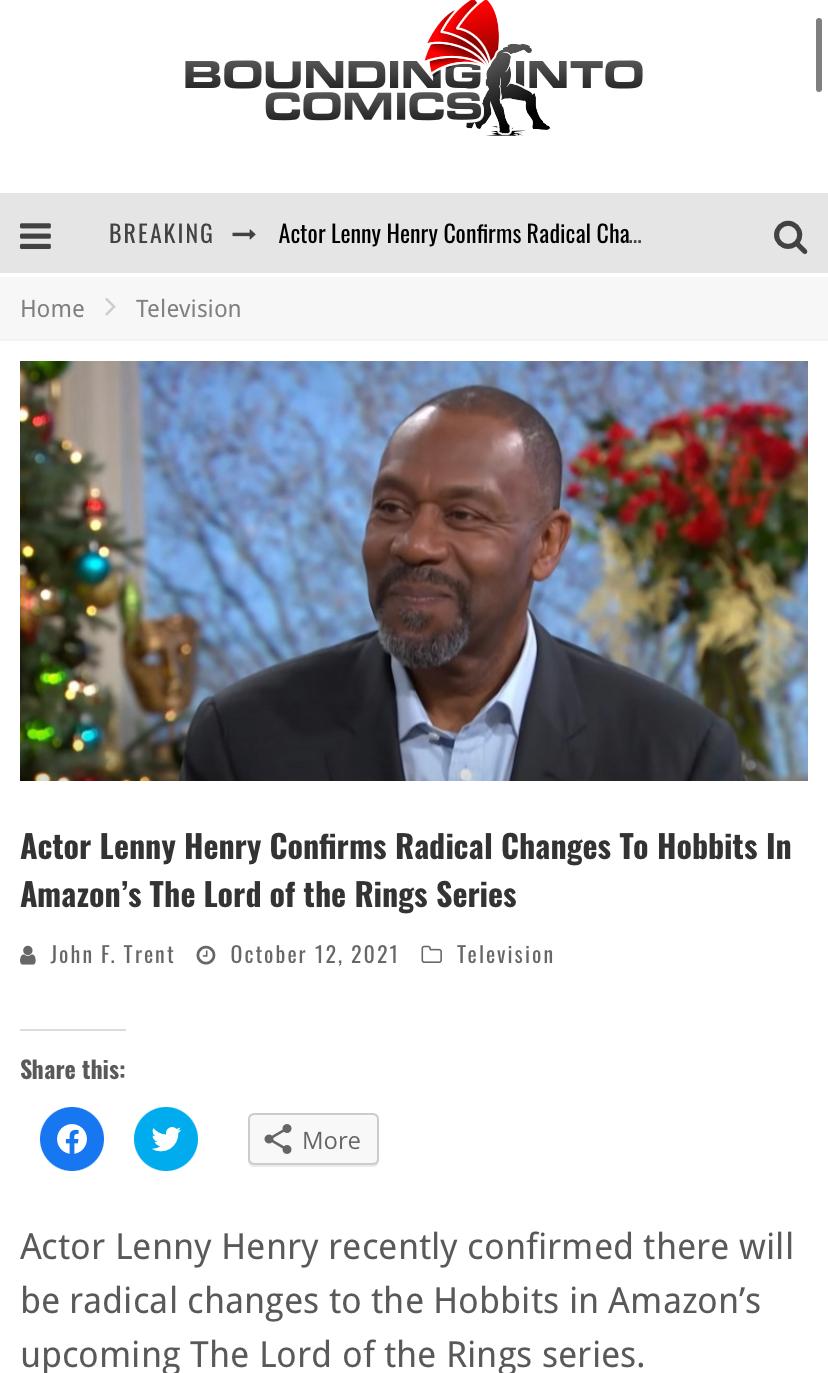 So literally the only reason for creating this show besides ((($))) was to ruin the entire mythos of Middle Earth.

My stance on LOTR canon remains unchanged. If it wasn't written by JRR or by Christopher, then it isn't real LOTR. End of story

They’re ruining everything else. May as well ruin LotR along with it.

I’d say we should ruin their great works of literature but they have none.

Congratulations on waking up from your ten year coma. Destroying anything and everything made by a white man is literally all the left has been doing for the past decade. Enjoy the brave new world you now live in. You may not leave.

At this point I’m stuck between two viewpoints

Wait, is the dollar jewish now?!

Hooray! Thanks Amazon for listening to the social media weirdos.

Hell they might be listening to the Tolkien Society at this point. Did you ever see the video lectures from their YouTube? It’s god awful and ridiculously woke

Oh yea. That’s true. Now they can just say they have the approval of the Tolkien society. So convenient how they waited until Christopher Tolkien was dead.

An amusing thrashing by Just Some Guy on the stupid "seminars":

So, they're going back to the stupid "if it looks human, it must BE biologically human" nonsense of sci-fi Creationism that thinks "race" and "species" are the same fucking thing. They even took the genetic component out of the word "tribe".

Blame Star Trek for that chestnut. Though in their case it was deliberate from the beginning as each species was just a metaphor for aspects of Humanity. Only over time did they apply more legitimate sci-fi worldbuilding. On the contrary with woke shit today, they're breaking down already established fantasy to deliver their messages.

Try and remake the <insert holy book of religion of peace> with a typical netflix gender and race switch?

i gotta say.. white people cant have anything with just them in it lol. seems every culture have lore and folk/fairy tales that usually have themselves as the majority of its characters..

i mean look at Squid Games, almost all koreans with a few other asians in it.

And that's why I have physical copies of the movies.

And thankful LOTR is FINISHED.

I think netflix is trying to do the same thing to Chronicles of Narnia. Globohomo is desecrating all of the Inkling's work

Will the White Witch stay white?

Snow White and Domino and Death from Sandman and other extremely white (super pale) characters have been made black already.

According to wikipedia it's Turkish for lion

As a rule, the evil characters stay White because it is in keeping with the underlying message/purpose.

That is untrue. Tribal cultures can and have integrated people from outside the tribe - bride kidnapping being the best known example. There's no reason why a raiding tribal culture would no longer be considered a tribal culture just because the neighbours they raid are of a different race.

Kidnapped women become part of the new tribe. Tribes are an extended family by definition. You could not have a tribe that was asian, african, indian, euro, etc. It would all breed together in a couple generations.

The context here seems to be Tribe in the Survivor sense, i.e. a bunch of random people tossed together by circumstance. Which is retarded.

This isn't how this rule works.

Put ketchup and mayo on 'em.

Was never going to watch it in the first place. Entertainmentism MUST go. The ONLY 'must see' is the reality of now. Fuck tv, Fuck Harveywood and it's lackeys.

Its nearly all unwatchable shit, but most people will still watch it anyways even though they don't even like it, its so strange.

THANK YOU! I'd up tick you 1000 times for saying that. It is baffling to think that anyone could be concerned w telly or movies while we are still in this shite!

There was 0% chance of it being good.

So there are black, Asian and brown, and even Maori types within it.

Absolutely nowhere they could come from. Any lands with those folk are so fucking distant as to make travel very unlikely.

And? We already knew it was going to be a shit show, and I have no intention of watching or supporting it in any way. Go hog wild for all I care.

Nice of them to give us a new word now that jogger is banned just about everywhere.

Stranger (news like "an Asian woman was brutally assaulted by a stranger on the street").

This is so fucking cringe

Others being the STOOR and FALLOHIDE.

And forget this moron talking like he knows anything.

WE SHOULD NOT EVEN SEE HOBBITS IN THE SECOND AGE.

Not to mention, by the time of the end of the Third Age, those distinctions had mostly vanished to assimilation. Tooks were described as being a little more Fallohidish than most, but by that point in the history, they were just ... hobbits. They didn't segregate themselves by subspecies anymore, if they ever did.

Yea they likely didn't. All just Hobbits in the Shire

Do whatever the fuck you want, I wont be watching it.

I can't wait to see Legolas' love interest Marisewlus get sucked up in a storm and fall from the sky like the other shitty fanfics these ideas came from.

For fucks sake chef, your better than this.

Nature segregates differences to communicate inspiration towards choice of reaction for self sustenance.

The few mix the many together to prevent the individual ONE from growing by choice of reaction to ALL; which in return would destroy the power of the "chosen ones" aka the few chosen by the ignorance of the many towards them representing each ONE with the choice to react to the balance within ALL.

Tolkien would be furious. LOTR is an allegorical tale about and against the semitic invasion of Northern Europe.

“ THE LORD OF THE RINGS IS OF COURSE A FUNDAMENTALLY RELIGIOUS AND CATHOLIC WORK; UNCONSCIOUSLY SO AT FIRST, BUT CONSCIOUSLY IN THE REVISION. — J. R. R. TOLKIEN TO ROBERT MURRAY, S.J. [1]”

Any devout Catholic writing a work will produce a work that is fundamentally Catholic. Same with any other faith. A man's worldviews are deeply ingrained in him and will be reflected his work

Even if you try not to it ends up that way. I wrote two characters for a book without much thought. One ended up being an anti state, freedom lover, the other ended up being a hardcore Christian. Both characters ended up representing two of my value systems, without any conscious attempt to, it all just came out that way. They even debate each other, and it was like me debating with myself and my own ideological conflicts.

People write what they know.

"The Lord of the Rings is of course a fundamentally religious and Catholic work; unconsciously so at first, but consciously in the revision. That is why I have not put in, or have cut out, practically all references to anything like 'religion', to cults or practices, in the imaginary world. For the religious element is absorbed into the story and the symbolism. However that is very clumsily put, and sounds more self-important than I feel. For as a matter of fact, I have consciously planned very little; and should chiefly be grateful for having been brought up (since I was eight) in a Faith that has nourished me and taught me all the little that I know; and that I owe to my mother, who clung to her conversion and died young, largely through the hardships of poverty resulting from it."

“ THE LORD OF THE RINGS IS OF COURSE A FUNDAMENTALLY RELIGIOUS AND CATHOLIC WORK; UNCONSCIOUSLY SO AT FIRST, BUT CONSCIOUSLY IN THE REVISION. — J. R. R. TOLKIEN TO ROBERT MURRAY, S.J. [1]”

No. The letters to German publishers on a possible German translation of The Hobbit in the late 30s pretty much says he has nothing against Semitic people.

"But if I am to understand that you are enquiring whether I am of Jewish origin, I can only reply that I regret that I appear to have no ancestors of that gifted people."

Don’t forget he also admonished them on Aryans being Indo-Iranian and not Northern European. It’s almost like the entire belief systems that 1930s Germany created is based on complete bull shit.

Socialists of the "national" variant, basing their belief system on bullshit?

That's what socialists do. Believe in complete bullshit, and then refuse to accept it.

Hope he enjoys his work being niggerfied from the after life.

Oof, better nobody tell you what Tolkien said to your one balled god... Annnnddddd too late, someone already did it.

But here is another snippet!

“I have in this War a burning private grudge—which would probably make me a better soldier at 49 than I was at 22: against that ruddy little ignoramus Adolf Hitler (for the odd thing about demonic inspiration and impetus is that it in no way enhances the purely intellectual stature: it chiefly affects the mere will). Ruining, perverting, misapplying, and making for ever accursed, that noble northern spirit, a supreme contribution to Europe, which I have ever loved, and tried to present in its true light.”

Looking at London I wonder who really was the ignoramus.

Are you referring to the influx of immigrants from Islamist countries? The ones that allied themselves with Germany in WWII?

Yes. Pisslam shitskins get the rope. Or are you that retarded to think mustache man would have let them immigrate?

Your grasp of history is alarmingly bad. I’d suggest not making public comments.

Considering nazi germany was a censorious heaven with Marxist economy... I still think the one balled god of the stormcucks was the ignoramus. Plus, those little allies to the nazis back in the day, remember those? The muslims... yeah, we all remember!