Win / KotakuInAction2
Win
Communities Topics Log In Sign Up
Sign In
Hot
All Posts
Settings
Win uses cookies, which are essential for the site to function. We don't want your data, nor do we share it with anyone. I accept.
DEFAULT COMMUNITIES • All General AskWin Funny Technology Animals Sports Gaming DIY Health Positive Privacy
108 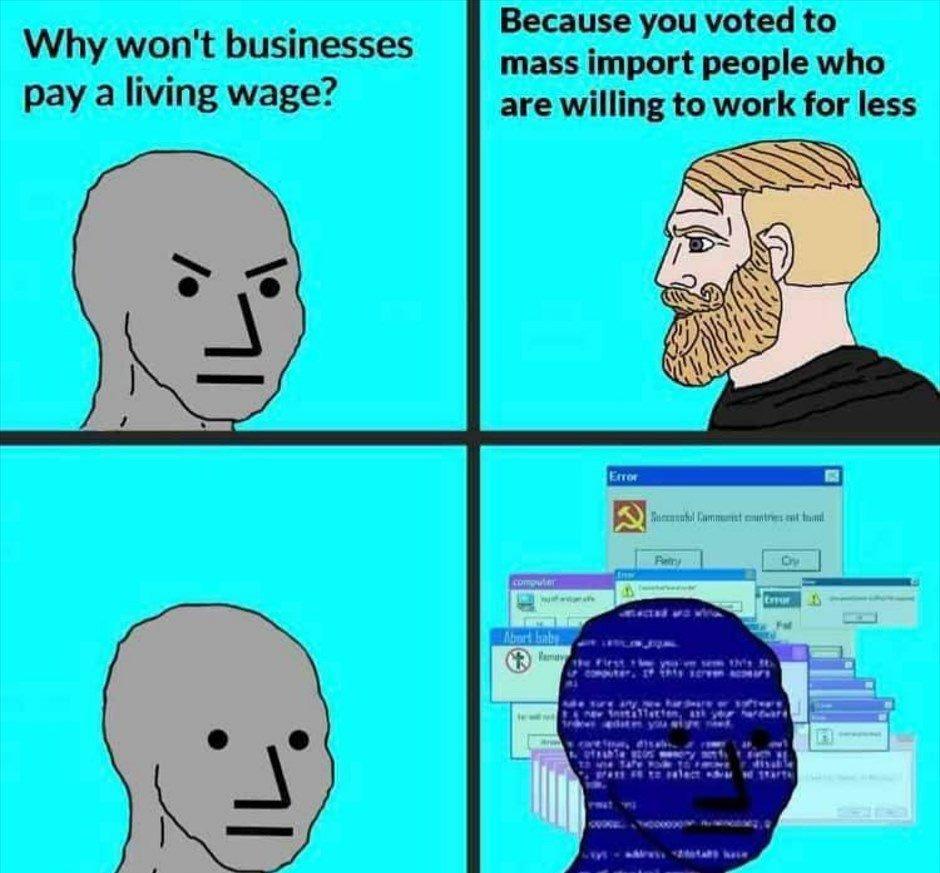 Well, that and women basically doubling the work force as they entered it.

That’s what I think any time people complain about wages. Having just gotten out of a relationship with a women that came to work and got leftist indoctrinated by the end of college, her working and getting an SJW degree mostly ruined the relationship and her. No time together. She became stressed and irritated. The debt for school was troubling. She got taught everything is racist so she would take offense to everything and look out for ways to be offended. She had no domestic skills and despite contributing nothing financially also decided to contribute nothing domestically.

If a girl wants to work, great, but it mostly ruins relationships and the labor market. I’ve been with PhDs and lawyers and college drop outs and at this point I’d rather date a barista or someone working at BestBuy. Or someone not working. The not working girls were the best on the relationship front. The girls that worked blew all their money once they had it anyway.

I work with a women who is one of the worst workaholics I have ever seen. She has a family and yet she is spending 80+ hours a week working. Our boss rewards her with exceptional performance reviews each year, but all I am thinking is, "bitch, don't you have a family to spend time with?"

I wonder if some of them just hate their families or don’t want to be with them.

Kids immitate the parent. If the parent is disagreeable and narcissistic so are the kids. This then naturally causes them to not want to spend time with their unpleasant kids.

Makes sense. I was with a crazy bitch once that had a kid she didn’t like and the kid was a crazy bitch too, bad as I feel saying that.

Poor women have always worked. But for the past 1,000 years, the stuff that women did as cottage industries got transferred to men mostly because of the shit-nasty technology that got introduced (the "industrial revolution" really started with the invention of the cam, which enabled wind and water mills, and thus powered weaver's looms and things like that.) Up until the late 20th century/this century, a lot of technology was either too heavy or too dangerous and plain old not interesting to a lot of women who like their fingers and such. But now that technology is getting properly advanced, even non-humans are starting to use some of it, it's become that easy ... Cripes, just look at the evolution of the car. It's next to impossible for a small, weak person to crank one up, and control it with NO automatic steering or brakes, but something more modern? Pshaw, they taught rats to drive little cars.

That "no wife of mine will ever work outside of the home" of 1950s television? Besides it being filtered through the eyes of the same .. kind of people ... that write this shit today, is kind of misrepresented now; it was a thing for men of those older generations to have a wife that didn't work because it made him look like he had a job good enough to support a family without having to rely on his wife. A man with a wife who worked for money (whether outside of the house, as, say, a typist or waitress, or took in laundry or babysitting) looked like a bum, or a guy with a shit job. Uh, just how much DOES an "orchestra leader" make, Ricky? About as much as a busboy?

A well-off man's wife didn't work for money. If she did get bored and needed something to do outside the home, she did volunteer work.

The problem with modern so-called "feminism" is that by the 1990s, they started taking away the choice of women to be full-time moms/housewives, whether they really had to work or not .. while still lionizing the so-called "choice" of being a fucking pos whore. Now we're EXPECTED to work, whether we fucking want to or not. We're at least expected to come with our own income now, at least.

Women working also impacts their dating prospects too. Most girls won’t get with a guy that makes less with them. Factor in diversity hiring and things generally being easier for girls to get higher in monetary ranks, and you have a bunch of girls that can’t date ‘down’ in their eyes with normal guys. When they try to date ‘up’ or across, those guys don’t want them as much because they’d rather get someone to help raise a family or just not get with anybody for a relationship because if there’s no kids then there’s no point. Then those same girls after want to ‘retire’ in their 30s to have kids while still expecting the husband to maintain their standard of living when they had two large incomes.

There’s a reason women are unhappier on average now adays. Very few women pull off ‘having it all’, and the ones that do usually do so often had help or aren’t very happy while doing it.

As funny as this is, it isn't true.

Some jobs just aren't worth a "living wage".

If it's work people don't want to do, then the employer needs to offer higher pay or benefits to attract people. Instead of that, they have a labour pool of immigrants and people on "temporary" visas to pay bottom of the barrel price.

It's the same with housing. People will say "Something needs to be done about these housing prices" and at the same time support increased demand for housing by bringing in thousands of new people every year to cities.

Fruit picking jobs at $15/hr would add around 2-5% to the cost of produce. With illegals, you get to pay for their hospital bills, ss fraud, and their children cost nearly twice as much to educate.

I'd be willing to pay an extra penny for a tomato, and reduced demand for illegals. Money well spent.

You forgot to include "cultural corrosion" in the first paragraph, second sentence.

Ton of self-projection. Most of what they complain about is what they're envious of and want to do themselves.

Point is they'd be worth even less with mass immigration.

A lot of jobs still exist as a courtesy. Like cashier. It’s not meant to be a calling or vocation. It’s at its best when young kids or people between jobs or family members needing some extra cash do it, not people thinking it’ll pay a $4k mortgage.

Oh, yeah, let's do away with cashiers. Maybe then the days of Abbie Hoffman will be back, and one will be able to slip entire carts full of groceries out the door once again, because of the lack of human eyeballs that give a shit.

Oh, they could hire security guards, but one making minimum wage is probably going to be sliding carts out himself.

I agree. The thing is that these mongoloids believe that you should be able to pay for things like a mortgage, a car, a college education, etc. with the salary of a burger flipper or a warehouse stocker. Anybody can do that shit, and there is always somebody willing to work for less. When they realize (if) that a gender studies degree does not provide the skills that people are willing to pay for, they decide to blame society and make everyone else pay for their mistakes.

Also, wages dropped when women entered the workforce, and no amount of economic growth is going to compensate for the doubling of the available labor. The truth is that being a housewife has become pointless, too many conveniences made it easy, boring. Modern society, a rising cost of living and a lack of kids have pushed women out of the house. Feminism plays another role, convincing women that kids are parasites holding them back, only to find out that nobody wants a washed-up 35 year old whore.